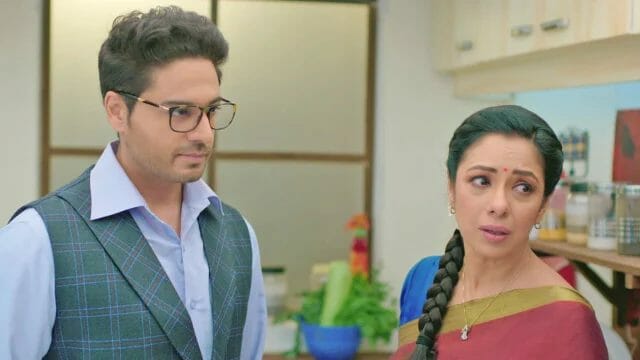 In today’s episode, Anuj says to Anupama that he can understand for a mother who can’t see a broken toy of her child, would be going through seeing Paritosh’s broken house. He praises Anupama’s courage for taking a stand for Kinjal against Paritosh. Anuj calls Anupama’s fighter. Anupama cries and says to Anuj that his fighter is tired of fighting. She adds she is finding it difficult to handle everything. Anupama feels sad that Paritosh targeted her upbringing. She add she sometimes want to get locked in the room and stay away from world. Anupama says she wants to spend time with Anu and Anuj but she is unable to look after them too. She breaks down. Anupama realises Anuj is hungry. She decides to prepare breakfast for Anuj and Anu. Anupama realizes she has to attend meeting at Anu’s school. Anuj feels glad despite everything Anupama never backs off from her responsibility.

Kinjal wakes up. Kavya, Vanraj and Dolly stand at Kinjal’s side. Dolly says Arya was hungry but they feed her milk. Leela asks Kinjal to think about Arya and move on. Vanraj asks Leela to shut her mouth as this is not the right time to talk with Kinjal. Kinjal asks for Anupama. Kavya tell to Kinjal that Anupama went back. Kinjal gets upset. Leela decide to call Anupama. Vanraj and Kavya ask Leela not to call Anupama as Anuj and Anu too needs her. He assures Kinjal he will call Anupama sometimes later.

Anupama asks Anu to get ready. Barkha, Ankush and Adhik ask about Kinjal. Anupama says she is fine. Barkha and Ankush say Vanraj and Paritosh are same. Ankush says Kinjal and Paritosh will get divorced soon. Anupama stand mum. Barkha says Anupama do so much for Shahs but they don’t value her.

Anuj asks Anupama not to help anyone until anyone asks her. He says he can see her getting insulted by Shahs. Elsewhere, Shahs stun learning that Kinjal wants to go to Anupama’s house. Kavya asks Kinjal to understand that Anupama already has a pressure of Anu and Anuj. Kinjal says she understand thus she is moving to Anupama’s house so that latter don’t have to keep switching from one house to other. Leela asks Rakhi why she is mum. Rakhi says she still can’t believe her own daughter wants to be with Anupama. Kinjal accuse Rakhi for trying to hide Paritosh’s secret. Pakhi talks with Adhik and says she took Paritosh’s side but somewhere she knows he is wrong. [Episode Ends]

Precap: Vanraj and Kavya drop Kinjal and Arya at Anupama’s house. Paritosh share with Samar and says now Anupama will instigate Kinjal for giving divorce to him.