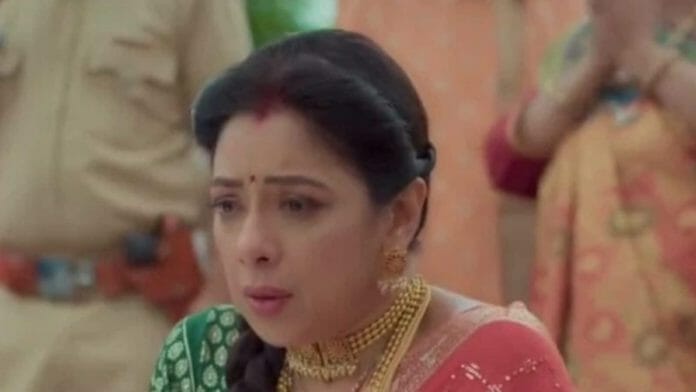 In today’s episode,  Mohit ask his crew members to get ready as she will reach anytime. He says she is coming. Kavya asks Mohit if he isn’t hyping so much. Mohit asks Kavya to wait till come. Maya makes her entry. She meets Mohit and Kavya. Maya talks with Mohit. Anupama signals Kavya and praises her. Kavya gives a smile to Anupama. Anupama think once she will meet Maya than only she will feel relaxed. Anupama feed water to Anu. Maya spots Anu with Anuj and Anupama. She says post meeting her, Anu will get more restless. Leela spots Anupama happy with Anuj, Anu. She comments. Hasmuk gets angry and throws the drink. Vanraj asks Leela why she comments on Anupama.

Barkha and Ankush meet guests as a happy couple. Ankush gets irked later. Barkha asks Ankush if he can’t pretend to be happy for some time. Ankush says he is tired. Barkha calls out Anukush’s illegitimate child. Ankush says his son is important like Adhik. He adds relationships are not illegitimate and it’s just the perception. Hasmuk sits alone. Anupama asks Hasmuk what is bothering him. Hasmuk shares with Anupama when one is upset than he/she is alone in the fair. Anupama sits teary. Hasmuk says if he talks with her than Leela and Vanraj feels bad. He asks Anupama to go and don’t worry about him. Anupama leaves.

Vanraj and Anuj bumps into each other. Paritosh’s volunteer promotes his business using Anuj’s name. Vanraj clears the volunteer’s that he is talking with Anuj himself. Volunteers apologize. Vanraj assure Anuj that he won’t let Paritosh misuse his name again. Anuj nods. Samar confesses his love for Dimple. Dimple asks Samar not to confess anything as she is not ready. Leela spots Samar and Dimple. She bashes Samar for getting attracted towards Dimple. Samar defends Dimple. Leela accuses dimple. Anupama defends Dimple. Leela says Anupama has a hand in inserting Dimple in Samar’s life. She goes mad. Anupama asks Leela to show some manner in a public place.

Samar confesses he likes Dimple. Leela against Dimple. Anupama questions Leela about hating Dimple. Leela and Anupama argue with each other. Leela calls Anupama heartless. Anupama asks Leela to be calm. Leela asks Anupama to not manipulate Dimple at her. She calls Dimple cunning. Anuj stops Leela. He asks Anupama to come along. Hasmuk corrects Leela. Leela says she won’t let Dimple’s dream come true to marry Samar. Dimple says she isn’t dreaming at all. Leela gives an ultimatum to Anupama. Maya captures the fight between Kapadias and Shahs.

Anuj asks Anupama if she is fine. Anu decide to dance with Anuj and Anupama. [Episode Ends]