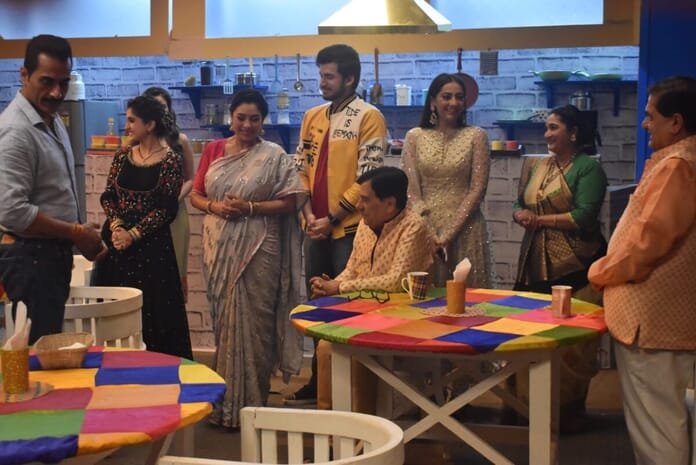 Today’s episode starts with Samar asking Pakhi to apologize Anupama. He adds because of her, Anupama and Vanraj’s relationship is messed up again. Pakhi says to Samar that it is not her problem. Samar drags Pakhi. Pakhi falls down. Paritosh come and accuse Samar for raising hand on Pakhi. Samar asks Paritosh not to judge him without even knowing full details. Both argues with each other. Paritosh and Samar fight with each other. Hasmuk see Samar and Paritosh fighting, he taunts them that they are doing good. Samar and Partish stands mum.

Leela feed milk to Anupama. Anupama gets upset because of Pakhi. Leela console Anupama. In the morning, Anupama see Kavya in the kitchen. Kavya informs Anupama that she has prepared breakfast for all, as she too can be a multi-tasker. Anupama about to prepare her breakfast. Kavya tells to Anupama that, she has prepared for her too. Pakhi come and gets elated seeing chocos breakfast. Anupama give home remedy to Pakhi in case her stomach aches. Pakhi behaves rudely with Anupama and leaves with Kavya.

Anupama goes to Vanraj and asks him to talk with Pakhi once. Vanraj says he will and realizes he got over board last night. Samar bring pamphlets. Anupama and Jignesh find letters upside down. Vanraj and Samar explains to Anupama and Jignesh that it is marketing strategy to print add upside down. In the meantime, Vanraj learn in the same place another café is opened too with good ambiance. Anupama boosts up Vanraj and asks him to do his work without bothering about new café. She asks him to bring clients for his café like he use to do for his company.

Further, Rakhi along with Paritosh and her friend spots Vanraj and Anupama distributing pamphlets. She feels ashamed. Anupama and Vanraj invite Rakhi to the café too. Rakhi and Paritosh leave the place. Vanraj says to Anupama that marketing was good. Rakhi gets angry on Vanraj for distributing pamphlets. He calls Shah’s roadside beggar. Vanraj and Rakhi argues with each other. Rakhi humiliates Shah’s and calls them beggar. Vanraj gets angry on Rakhi. [Episode Ends]

Precap: Anupama apologize to Vanraj for accepting his friendship after 25 years. She further asks Kavya if she has a problem with her presence in the house and sharing academy with Vanraj. Kavya replies yes. Anupama asks Kavya to pack her stuff and get out from her house and academy along with Vanraj. Shah’s stands shocked.