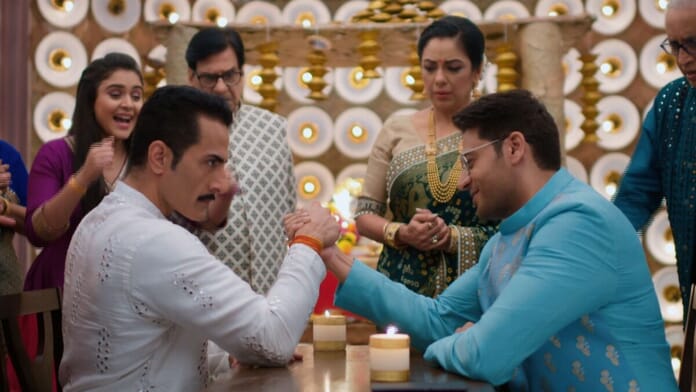 Today’s episode starts with Hasmuk yelling at Leela. Leela asks Hasmuk to have his medicine. Anupama says to Leela that she always give explanation whenever latter gets angry with her. But this time she will question her. Anupama asks Leela when Doly went on international trip with her colleagues then she was excited and for her she is raising a doubt.

Vanraj interrupts and says because Doly’s colleagues doesn’t have a crush on her. Anupama asks Vanraj how they know that. She says whats going inside, none can read. She adds from past 25 years what was going inside Vanraj she was clueless too. There, Samar and Kinjal gets excited to pack Anupama’s stuff. Paritosh asks Samar and Kinjal not to side Anupama as society will raise question on her and he is concerned about her.

Anupama assures to Leela that none can touch her without her concern. She adds ever she felt anything for Anuj than she will first reveal to Leela. Anupama asks Leela and Vanraj not to bother about her nor do any clashes at the house because of her. She thanks them for encouraging her. Hasmuk and Anupama leave the place.

Other side, Samar talks with Nandini and gets excited thinking Anupama is growing. Rohan interrupts the duo. Nandini says to Samar that Rohan doesn’t like to lose and he will sit quiet. Rohan stand far and smirk. Here, Hasmuk tries to cheer up Anupama. Pakhi, Kinjal and Samar come. Anupama share with them about her childhood dream. She says she always dream of boarding the flight and seeing the sea.

Here, Kavya talk with Vanraj and says she feels jealous of Anupama as she is going with Anuj on a business trip. Vanraj says he is unaffected. There, Anupama gets excited about her upcoming trip with Anuj. She recall she has to return Rakhi’s money too. Ahead, Vanraj hear Anuj’s name and wonder why he gets jealous by Anuj as he loves Kavya. He says he never loved Anupama than why he is bothered seeing Anuj and Anupama together.

Precap: Anupama board flight with Anuj. Kavya asks Vanraj what is between him and Anupama that they are not yet separated from each other. Vanraj says he is clueless too.