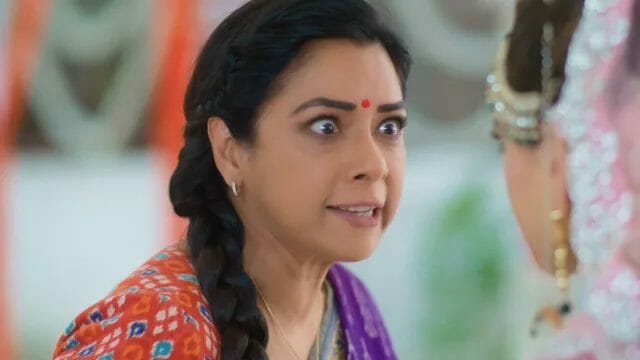 In today’s episode, Leela asks Kavya to start the puja. Kavya talks about Pakhi. Hasmuk asks to continue without Pakhi. Anupama and Kavya perform Diwali puja at their places. Anupama and Vanraj get restless while doing puja. Shahs light firecrackers. Vanraj says every year Pakhi is most excited to light lamp and burst firecrackers. Anupama along with Anuj, Ankush and Anu visit Shahs. Anu gift greeting card to Shahs. Anupama assures Vanraj that Adhik didn’t accompany them. She looks for Pakhi. Leela and Vanraj tell to Anupama that Pakhi didn’t come out from her room from long. Vanraj asks Anupama to meet Pakhi.

Pakhi and Adhik walk hand in hand. Anu congratulates Adhik and Pakhi on their marriage. Adhik and Pakhi explain about marrying each other. Pakhi says Vanraj wanted to send her to other city thus she gave Adhik an idea to marry in the temple. Adhik says Pakhi was panicking thus he ended up marrying her. Pakhi says to Shahs that they can scold her or can beat. Hasmuk asks Pakhi not to utter word. Vanraj breaks down. Kavya and Anuj comfort Vanraj. Leela asks Pakhi and Adhik why they didn’t carry poison along.