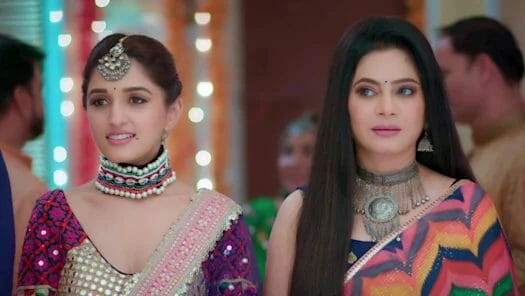 In today’s episode, Anuj says to Adhik that he failed us. He says to Adhik that they trusted him but he disappointed. Anuj asks Adhik didn’t he asked him to be patient until they convince Vanraj. Adhik nods. Anuj asks Adhik not to speak up. Kavya calls Pakhi shameless. She says Pakhi don’t have brain. Samar side Kavya. Ankush says both Adhik and Pakhi don’t have brain. He says Anupama is right everything is instant now but instant marriage they are seeing today.

Kavya asks Pakhi if she think that life is fairytale after marriage than she is wrong. She adds real struggle begins after marriage. Kavya asks Pakhi what if family don’t accept her relationship than what she will do. She asks how they will survive if the family disowns them. Pakhi says to Kavya that why family will not accept them. She says she did wedding properly. Anupama and Leela ask Pakhi why she didn’t wait for one day. Adhik defend and says taking a decision was not easy. He expects Anuj to side him. Adhik asks Anuj to understand his love. Pakhi tries to convince Shahs to accept her marriage. She goes to Vanraj and urges him to accept her marriage with Adhik. Pakhi asks Vanraj to excuse her mistake like Paritosh and hug her. She begs forgiveness from Vanraj. Adhik think if Vanraj if accept others will get convinced easily.

Vanraj ignores Pakhi and leave the place. Pakhi cries. Ankush asks Adhik why he didn’t waited for one day. Anupama says that Pakhi and Adhik are clueless about the consequences of their step. Shahs worries about Vanraj’s reaction on Pakhi’s action. Leela asks Kavya to go to Vanraj. Kavya says she don’t have a courage to face Vanraj.

Vanraj says not all daughters are boon. He regrets being Pakhi’s father. Anupama stand teary. Adhik walks out from the house. Pakhi and Vanraj recall their past. Vanraj adds he is a father thus he will not curse Pakhi but he will not bless her either. He asks Pakhi to leave the house. [Episode Ends]