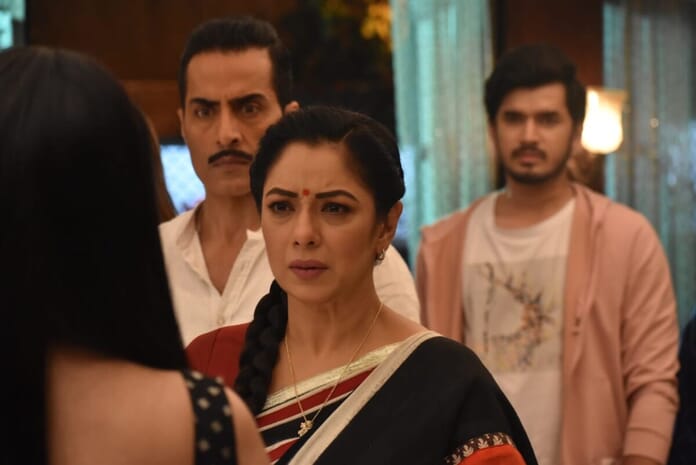 Today’s episode starts with Anupama crying. Jigesh come and console Anupama. Hasmuk accuse himself for the reason behind Anupama’s tear. He wish everything gets on its place soon. Anupama encourages herself not to cry and decide to stand up and finish other word.

Kavya complaints to Vanraj for talking about loan from her fans. She says she felt embarrassed. Vanraj says to Kavya that was a casual conversation. Both argue with each other.Kavya says to Vanraj that he can’t speak with her in rude tone. Vanraj replies to Kavya, she hasn’t yet seen his tone. He adds if she wants him to talk good than she should learn to control her tongue. Kavya sits mute.

Anupama see Pakhi dancing. She think post her function she will talk with Pakhi and will alert that her tantrum is getting over board now. Anupama further see Pakhi’s function dress and finds it oversized. She fixes Pakhi’s dress. Anupama decides to cheer Pakhi and take selfie with her. Pakhi come and lashes out at Anupama for touching her dress. She claims Anupama wants to become superior by stitching the dress. Anupama asks Pakhi not to misbehave and she is sparing her because of dance competition. Pakhi yells at Anupama.

Hasmuk and Leela come. They side Anupama and asks Pakhi not to misbehave with her mother. Pakhi replies to Leela too. Leela scold Pakhi. Pakhi asks Leela not to scold her because of Anupama. Paritosh and Kinjal hear the fight. Paritosh gets irked with the next drama of the house. He says no one can breathe freely in the house. Kinjal and Paritosh goes to check.

Argument between Pakhi, Anupama and Leela. Leela tries to make Pakhi understand that Anupama was stitching her dress so that on the stage she doesn’t go through malfunction. Pakhi says she doesn’t need mother to stitch her dress as tailor is there. Anupama asks Pakhi if she is ready to bear wardrobe malfunction but can’t take her help. Pakhi asks Anupama to stop being superior.

Precap: Anupama decides to visit with the family to see Pakhi’s dance competition. Pakhi asks Anupama not to show her face as she wants to prove her without her too she can win the competition.