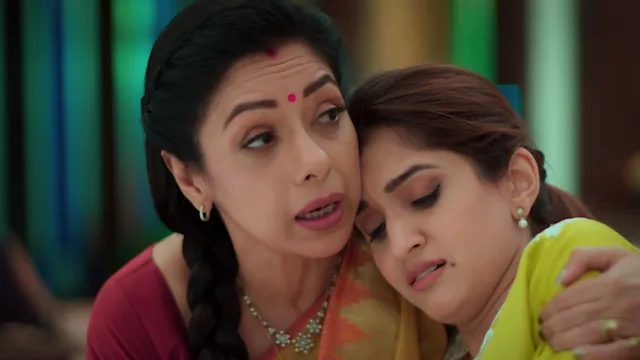 In today’s episode, Anupama asks Anu if she made the Rakshabandhan. Anu tells to Anupama that she learned making Rakshabandhan at orphanage. Anuj says they will send Rakhi. Anu says they will make Rakhi for everyone including Shahs. She says she will tie Rakhi to Anuj and Anupama too. Anuj asks why. Anu says Hasmuk told her that Rakhi is tied to the one who protects us thus she will tie to them too. She asks Anupama if Shahs will come for Rakhi or not. Anupama diverts the talk and says it is her first festival at the house and they will celebrate it grandly.

Vanraj asks Shahs to celebrate Rakhi to divert Pakhi’s mind post she will slip into depression. He asks Shahs not to talk about what happened already. Leela side Vanraj. Anuj and Anupama pray to God along with Kapadia. They decked up to celebrate Rakshabandhan. Shahs pray to God too. Anu along with Anuj and Anupama hail Lord Krishna. Vanraj gives his support to Pakhi. Barkha gets anxiety.

Shahs celebrate Rakhi. Kinjal wait for Samar. Leela says Samar’s train might be late. Dolly cry and miss Anupama. Vanraj says to Dolly that Anupama belongs to Kapdia’s. Pakhi regret separating Anupama from her family. She accuses Vanraj for not stopping her from insulting Anupama. Vanraj sit stunned. Dolly decide to visit Anupama. Vanraj asks Dolly if she has lost her mind. He says despite knowing everything she is deciding to go to Anuapma. Kavya side Dolly and says Anuj has banned Anupama’s entry but they can visit latter still.

Anu asks Anupama and Anuj if no one from Shah house will visit them. She waits for Paritosh and Samar. Anuj asks Anu to tie Rakhi to him as Samar and Paritosh might be busy. Samar makes a dramatic entry. Anupama, Anu and others get happy. Samar dance. Anupama hugs Samar. Samar informs Anupama that post learning her disrespect he landed directly to her house. Sara compliment Samar for making a dramatic entry.

Precap: Anupama takes care of paralyzed Anuj. She vows to get him better.