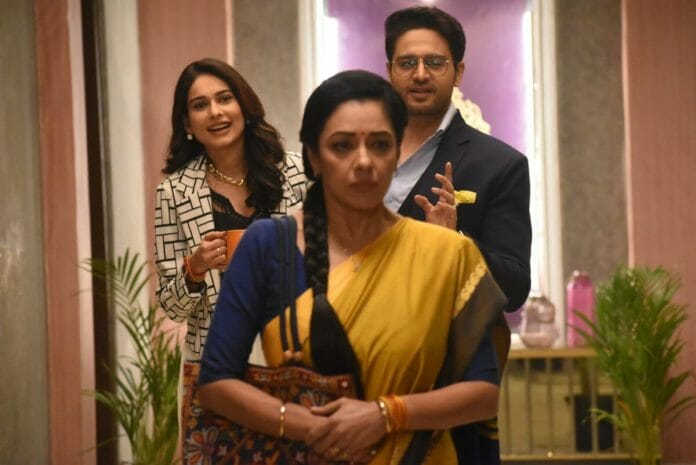 In today’s episode; Anupama says to Anuj that she is leaving the house yet she will remain with him always. She asks Anuj not to get worried about her. Anupama asks Anuj to only think about Malvika as she needs him the most. Anuj sit mum. Anupama about to leave. Anuj says to Anupama that he won’t be able to wait for anyone be it Malvika or her. He adds he is now not able to lose Anupama as he already lost Malvika. Anuj says he won’t be able to live without them thus he took a decision. He asks Anupama to stand by his decision without any if but. Anupama stands mum. Anuj says his decision is right. Anupama asks about it. Anuj asks Anupama to wait for tomorrow. Anupama decide to support Anuj. She worries about the upcoming.

Vanraj, Malvika, Anupama and Anuj waits for the new day. Anupama gives her support to Anuj. She feed Anuj with curd. There, Vanraj think Malvika call him to the office. He worry what planning is being done at Kapadia house. Hasmuk stops Vanraj for going to the office. Vanraj refuse to stay back. He asks Paritosh to accompany him too.

Vanraj meet Malvika. He asks what Anuj has decided. Malvika says Anuj took his decision and it is time for her to decide. She think why Anuj don’t understand her. Here, Anupama gets angry on Anuj for taking the decision. Anuj sit mum. Malvika reveal to Vanraj that Anuj returned back her everything. Anupama asks Anuj to answer why he took such decision. Malvika tell to Vanraj that Anupama give her stakes to Anuj and latter transferred everything to her. Vanraj gets happy and imagine owing the company. Malvika feels guilty.

Anupama asks Anuj to reply her. Anuj says he don’t have any answer because Malvika isn’t liking his presence. Anupama tries to make Anuj understand that Malvika needs him. Anuj says Malvika now wants to do business alone. Anupama asks Anuj not to leave the near ones at the tough time. Anuj tell to Anupama that he is doing everything for Malvika’s happiness. Anupama says to Anuj that Malvika is working with a wrong person. She tries to convince Anuj that Malvika might give everything to Vanraj. Anupama says to Anuj that his decision is wrong. Malvika refuse to take Anuj’s share. Vanraj manipulates Malvika yet again. Anuj refuse to handle the business anymore. He share with Anupama that he will always stand by Malvika but will not over take the company. [Episode Ends]