Episode begins with Vanraj says Anupamaa does mistakes and if he tells something then she starts to cry then what he can do. He says he earns for his family and in return he just expects peace in home but because of her it’s not possible. Jayesh says it’s not just Vanraj’s house, it’s Anupamaa’s house too and says he doesn’t want to interfere between husband and wife but Vanraj should not treat his wife like this in front of his parents.

Vanraj and Leela leaves from there without eating anything. Jayesh feels bad for Anupamaa. Vanraj takes his mobile from pocket and asks Kavya that who was hearing everything till now, does she feel happy now. She replied saying her anger decreased little bit but she will be happy only when he says he is ready to marry her.

Jayesh asks Leela that what she gets for creating misunderstandings between Vanraj , Anupamaa. He says he knows that she is the one who told Anupamaa to throw Kavya out of the house but in front of Vanraj she put all the blame on Anupamaa. She lies to him saying she didn’t said anything to Anupamaa. He said without her instigation Anupamaa would not have took that step and leaves from there after warning her.

Vanraj recalls Kavya’s marriage talks and vents out his frustration on Anupamaa who came to their room. He yells at her saying she never cared about his image and today spoiled that in front of Kavya too. She pleads him to listen her once. He says he can’t understand her ever and regrets for marrying her who knows nothing other than cooking. He insults her talking about his standards and all.

He asks did she ever thought why he didn’t took her for any parties or business meetings because she doesn’t know how to behave and they doesn’t have any common interests too and she ever thought why he never approached her. He tells her to leave the room which shatters her. She apologize to him standing there but he pushes her outside and locks the room from inside. She cries silently.

Devika takes Anupamaa to her house and asks what happened why she is keep crying like this. She says she was shocked when Anupamaa called her at this time. She asks did Vanraj said anything to her. Anupamaa recalls Vanraj’s words and says from the day she married she is trying to become his wife but he still feels she is not a match for him and he regrets for marrying her. Devika asks why he said like that.

Anupamaa says she is uneducated and doesn’t know how to talk, masala smell comes from her, she doesn’t even know how to say sorry. She says she wanted become something but after marriage how her priorities changed she herself doesn’t know. She says even though she tried to go to college, Leela stopped her that time Vanraj didn’t make Leela understand now he is saying she is uneducated. She says she just expected respect which she never got.

Everyone knows what all she can’t do but no one seeing what she is keep doing in all these years and cries hugging Devika. Devika says a mother doesn’t even gets a break and they are easily blaming her. Anupamaa tells her to drop her in her house and thanks her for coming to her when she called her.

Precap – Devika warns Vanraj. Vanraj apologize to Anupamaa and proposes her to marry him again which shocks Kavya. 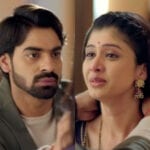