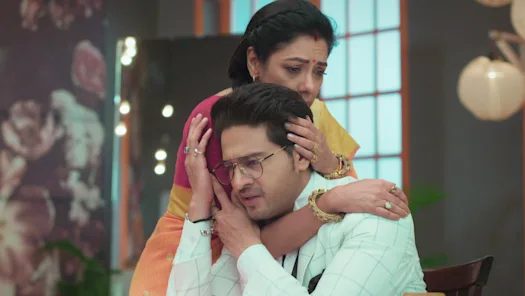 In today’s episode, Samar thanks Anuj for funding for him. Anuj asks Samar to be quiet. He asks Samar to keep the talk between them. Samar says to Anuj that he will return his money with interest. Anuj asks Samar to enjoy the phase. Barkha over hears Anuj and Samar’s talk. She think for Anupama’s kid Anuj is funding and for her family he is about to make an announcement. Barkha worries about Anuj’s decision.

Vanraj and Leela stops Pakhi from going to Anupama’s place. He says she did mistake already and now he should not mess up more. Leela adds Anupama will not welcome her rather she will slap her. Pakhi stops herself.

Anupama and Anuj ask Anu to tie Raksha to Samar as Pakhi might be waiting for him. Anu discloses she has invited Hasmuk and others without their acknowledgement. She feels sorry. Anupama and Anuj ask Anu not to be sorry. Anupama adds Anu wants to end the fight. Hasmuk, Kinjal, Kavya, Jignesh and Dolly enter the house. Hasmuk says Anu invited him thus he is here. Anupama gets overwhelmed seeing her family. Barkha share with Ankush and Adhik that Shah’s are weird as last day they fought and today they are here. Ankush says if Shah’s keep entering their house than Anuj will lose interest in them.

Pakhi makes a shocking entry at Kapadia house. Anupama asks Pakhi if she miss to insult her thus she is here to complete her talk. She asks Pakhi to call Vanraj and Paritosh too and disrespect her together. Pakhi stand stunned. Leela gets furious on Vanraj for allowing Pakhi to visit Anupama. She says Pakhi went for Adhik. Vanraj sit mum.

Anu demand Anupama to allow Pakhi to come inside the house. Anupama asks Pakhi to come. Pakhi thanks Anupama for excusing her. Anupama asks Pakhi to come out from her illusion. She gives an earful to Pakhi for disrespecting her. Anupama says a mother never avenge her child. She gets emotional. Anupama decide to celebrate the festival despite everything. Hasmuk and Dolly side Anupama. Anuj says they should celebrate the festival like there is no tomorrow. He says they should live in the moment.

Anuj feels proud of Anupama. Anupama says it is good sometimes to be a tough mother. Adhik and Pakhi signal each other. Leela gets irked with Shah’s visiting to Anupama. Vanraj sit stressed thinking his family left him and went to Kapadia’s. Anupama along with Shah’s and Kapadia’s, celebrate Rakhshabandhan. Anupama gets elated seeing Bhavesh. She dances for his brother. Vanraj dream celebrating Rakshabandhan with his family. Back to reality; Vanraj think Anuj and Anupama took away his family and now both will suffer. Barkha and Ankush worry about Anuj’s decision. Shah’s return home and Vanraj says everyone is looking happy. He complaint none bothered about him and Leela. Shah’s stand stunned. [Episode Ends]