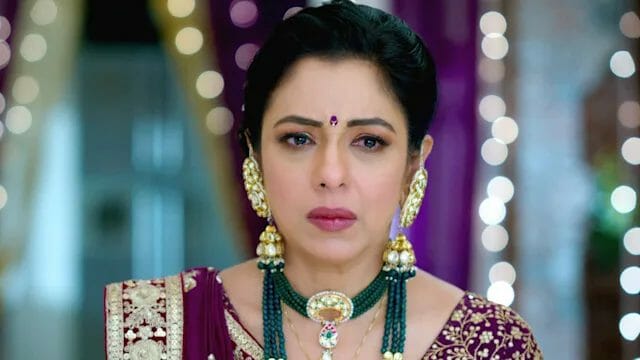 In today’s episode, Bhavesh scared Anupama with a lizard. Anupama runs after Bhavesh. Kanta meet Anuj and Anu. Bhavesh gives his blessing to Pakhi and Adhik. Pakhi thanks Bhavesh for accepting her relationship with Adhik. Dolly celebrate bhai dhoj with Vanraj. Meenu wait for Pakhi. Anupama perform bhai dhoj with Bhavesh. Pakhi misses Paritosh and Samar. Anuj and Adhik understand Pakhi. Pakhi share with Adhik that she is craving for Paritosh and Samar. She says even she can understand he is waiting for Barkha to perform the ritual.

Pakhi perform bhai dhoj with Paritosh and Samar. Adhik asks Barkha if she will not perform the ritual. Barkha refuse to celebrate the bhai dhoj with Adhik. Adhik gets upset. Leela tells to Vanraj and Hasmuk that Pakhi and Adhik can get marry within four days. Anupama announce Pakhi and Adhik’s marriage. She says Pakhi will get married from Shah house. Pakhi demands for destination wedding.

Barkha asks Pakhi if Vanraj is capable for doing grand wedding. Anuj stops Barkha. Pakhi gets adamant. She demand for grand wedding and adds Anuj took her responsibility thus he should plan for decent marriage. Kanta asks Pakhi not to break Vanraj’s heart by refusing to get marriage functions done at Shah house. Pakhi cries and asks Anuj to understand that marriage is a one-time chance to celebrate. She says it will be her last demand. Anuj agree for grand marriage. Anupama stop Anuj. [Episode Ends]