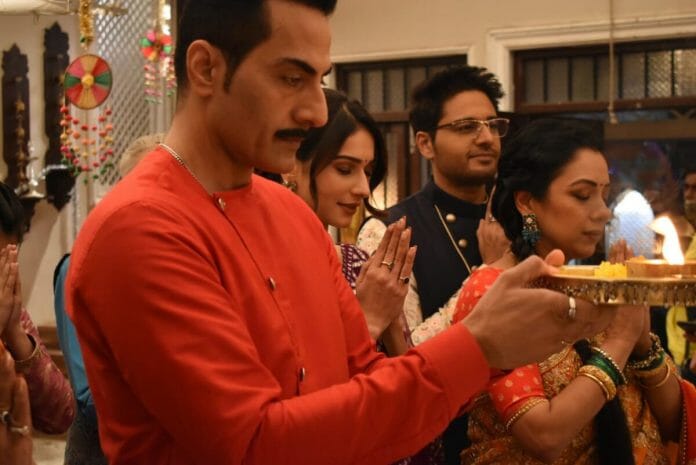 In today’s episode; Anupama says to Anuj that he is not doing right. Anuj says his decision is right and he fought with himself to come to the conclusion. He says he is broken and can’t fight again. Anupama says that he is wrong and she will not give upon easily. She gets teary. Anuj asks Anupama if she will support him. Anupama stand mum. There, Malvika says to Vanraj that she won’t let Anuj do the madness. Vanraj instigate Malvika and says Anuj left her but not Anupama. He says Anuj can’t think beyond Anupama. Anupama decide to not support Anuj. She says his decision is wrong and she will not let him do the mistake.

At Shah House, Kinjal worry what might be happening. Leela says thus she was sending Paritosh. Paritosh says none would have listened to him either. Kavya worries if Malvika will back out her job will be at risk too. She pray Anupama and Anuj’s partnership should not be broken instead Vanraj and Malvika should cut ties. Vanraj instigate Malvika and says Anupama and Anuj is trying to become great in everyone’s eyes. He adds Anuj is not her brother anymore and just Anupama’s boyfriend.

Anupama asks Anuj if he will leave Malvika with Vanraj despite knowing Mr. Shah is wrong. Anuj refuse to control Malvika’s life. Anupama tries to convince Anuj not to give upon. She add Vanraj is trying to benefit Malvika’s fame. Anupama asks Anuj not to leave everything else Vanraj will do the unthinkable. Anuj refuse to fight back. Anupama refuse to support Anuj. Ahead, Vanraj keeps manipulating Malvika and convince her that Anupama is first person in Anuj’s life and everyone comes second. He promise Malvika to be with her always. Anupama asks Anuj to be with Malvika. She says he can leave everything for Malvika but he can’t leave her. Anupama decide to stand with Anuj against Vanraj. Anuj smile hearing Anupama. Anupama and Anuj share moment together.

Furthermore, Anupama walks to Malvika’s cabing. She spot Vanraj and Malvika together. Anupama says to Malvika that she wants to talk with her without Vanraj’s presence. Vanraj asks Malvika to talk in front of him. He gets adamant. Vanraj claim Anupama is here to brainwash Malvika as latter understood Anuj’s planning. Vanraj asks Anupama to leave the place. Malvika asks Vanraj to leave her with Anupama alone. Vanraj worries if Anupama will spoil his plan. [Episode Ends]

Precap: Anupama asks Malvika to be careful as Vanraj might ditch her later. Vanraj taunts Anuj for being an orphan