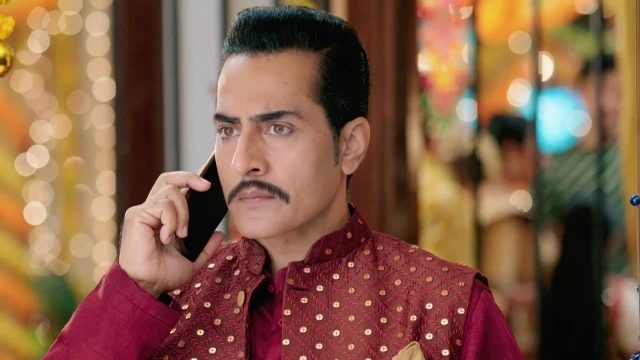 In today’s episode, Anuj tells to Anupama that he is tried doing jogging. Anupama cooks. Anuj says it is hot. Anupama gets smitten seeing Anuj. Anupama burns the food. Anuj teases Anupama. He asks Anupama why she was staring at him. Anupama says to Anuj that he belongs to her thus she has a right to gaze at her. Anuj says to Anupama to stop being cute. Barkha spots Anupama and Anuj. She asks what they are cooking. Anupama tells paratha. Barkha asks Anuj didn’t he told Anupama that she don’t eat oily food. Anuj tell to Barkha that Anupama prepared the kind of breakfast she eats.

Adhik and Sara come home. Barkha says kids are here. Anupama runs to meet them. Barkha says Anupama don’t even know her kids. Anuj praises Anupama. Barkha stands shock. Leela, Hasmuk and others come back home. They decide to welcome Anuj and Anupama. Anupama welcome Sara and Adhik. Sara tells to Anupama that she already know her and a fan of her since she saw her wedding proposal. She calls Anupama aunty. Anupama gets emotional. Anuj asks Adhik and Sara not to worry as Anupama is crying because she is happy. Sara and Adhik gets happy meeting Anuj. Sara asks Anuj to read poetry for her. She praises Anupama. Anuj gets happy. Ankush says to Barkha that Sara is bonding with Anupama and it is good. Barkha ignores. Ankush asks Barkha to get happy about something. Barkha, Anukush, Anuj, Sara, Adhik and Anupama share a talk with each other. Barkha stops Adhik from revealing about their business status to Anuj and Anupama.

Leela sees her name on nameplate. She thanks Vanraj. Vanraj says he learnt from Anupama that women equally run the house and deserves a name on nameplate too. Kavya asks Vanraj why her name is not on the plate. Vanraj says because she is a guest. Leela decide to gift herself. She gift herself house key. Barkha says Anupama can’t run the business. She decides to involve Adhik to fulfil her wish.

Leela decide to run the house. Barkha says she can’t let Anupama take over the house and business. Anupama says to Anuj that if Barkha is heartbroken because party got cancelled. Anuj says Barkha is stubborn and will throw party some other day. Later, Anupama says to Anuj that she don’t want to own her house and business. She add she don’t want to lose her identity. [Episode Ends]

Precap: Samar, Pakhi and Paritosh meet Anupama. Shah’s welcome Anupama. Barkha asks Anuj don’t he think someone else should get a share in a business too.