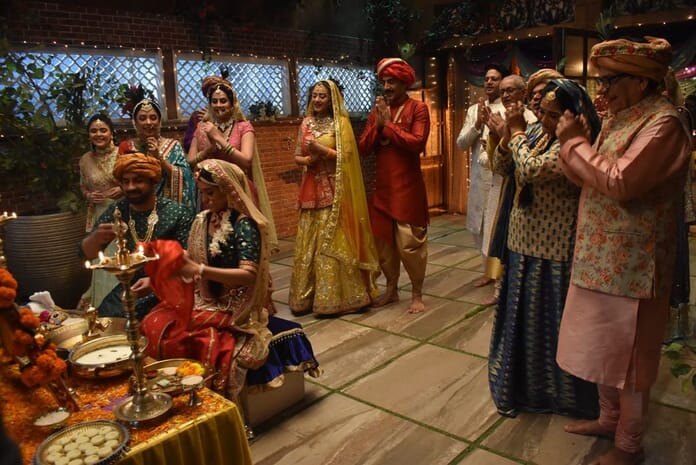 Today’s episode starts with Leela hailing Lord Krishna. Shahs repeat after her. Kinjal and Partiosh starts the Puja. Shahs celebrate the bird of Lord Krishna. Ahead, Anuj and GK gets smitten seeing instant cake. Samar explain Anuj and Gopi that Anupama always prepare instant cake whenever he is upset or happy. Anupama adds they always celebrate win by cutting cake. She says he saved Samar life and the cake is small gift by them. Anuj and Gopi gets smitten. Anuj cuts the cake and thanks Anupama for making his day and because of her he got a chance to meet Shahs.

GK tell to Shahs that Anuj stopped celebrating his birthday post his Parents demise. Ahead, Shahs praise Anuj fitness. Vanraj gets jealous and compares himself to Anuj. Kavya asks Vanraj to talk about the factory deal. Anuj bids adieu to the Shahs. Kavya asks Vanraj to click Anuj’s picture with the family as latter will not come each daily.

Anuj and Gopi thanks Shahs for their hospitality. Leela says to Anuj she wish he liked them. Anupama give left sweet to Gk as latter asked her to pack for them. GK bless Anupama. Vanraj stops Anuj and talk about warehouse. Anuj tells to Vanraj that his legal team is reading the papers and he will come to any conclusion soon. He also asks Anupama and Vanraj to visit his office. Later, Anupama stands on door to bid adieu to Anuj and GK. Vanraj asks Anupama if sweets are getting distributed thus she is standing on the door. Anupama says it is call a manner and he should learn some too.

Kavya praise Anuj and Vanraj gets jealous again. Anupama learn from Samar that Nandini was betraying him. Anupama asks Samar to take decision patiently. Kavya says to Vanraj that Anuj has a soft corner for Anupama and they will benefit the situation. Vanraj gets stuns. Anupama thanks God for saving Samar. [Episode Ends]

Precap: Kavya and Vanraj visit Anuj office and see GK sitting on chair Anuj’s chair. Kavya says to Anuj that he is good human thus allowing househelper to sit on the chair. Anuj gets furious hearing Kavya. Anupama come to Anuj’s office. Vanraj asks Anupama if she was feeling ashamed to accompany them. Anupama and Vanraj argue with each other. Anuj over hear their talk.