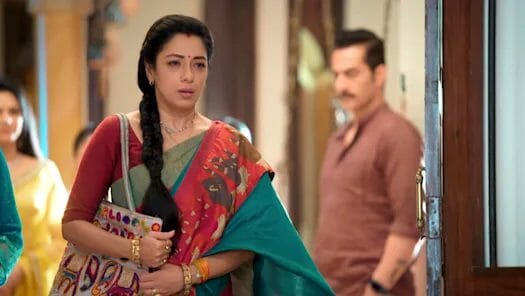 Pakhi will regret insulting Anupama. Will she be able to apologize to Anupama?

In today’s episode, Hasmuk complaints to Vanraj for not taking stand for Anupama against Pakhi. He says if anyone louds his/her voice against Leela than he gets angry. Hasmuk asks Vanraj why he was silent when Pakhi was insulting Anupama. Kavya side Hasmuk Kavya tried to help Anupama. Anupama stops her. She recalls her moments at Shah house. Kavya hugs Anupama. Anupama gives hug back to Kavya. Kavya says to Anupama that if ever she needs a friend, she will be there for her. Anupama feels glad. Kinjal gets emotional. Rakhi think Anupama’s own children disowned her and Kavya is giving her support. Anupama bumps into Hasmuk. Hasmuk give sweet to Anupama. He handovers Anupama’s hand to Anuj. Hasmuk blesses Anupama and asks her to go. Anuj takes away Anupama. They reach home.

Anupama decide to be in the car for some time. Anuj takes Anu. Anu asks Anupama to have water. Anupama recall her moments at Shah house. She breaks down. Barkha gets stressed post learning from Ankush that Anuj is going to make an announcement. Anuj come and inform that he has to make an important announcement. Barkha stand stunned.

In the upcoming episode, Anupama will decide to move on from her past. Elsewhere, Pakhi will regret her action against Anupama. She will decide to apologize to Anupama. Vanraj will stop Pakhi from apologizing to Anupama. How Pakhi will react on Vanraj’s decision will be interesting to watch. Furthermore, another tragedy to strike Anupama as Anuj will slip into coma. What next happens in the show will be interesting to watch