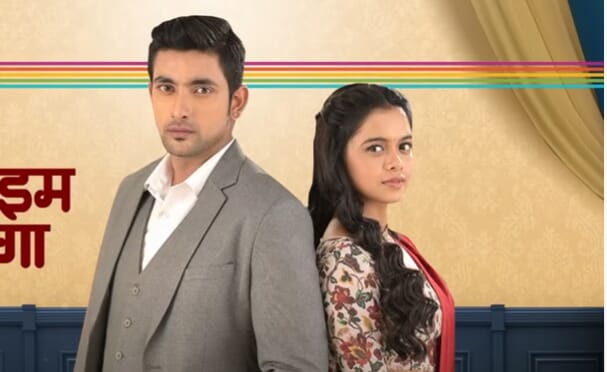 Episode begins with Suraj gives full payment for necklace to the jeweller. Veer taunts Suraj and tells the jeweller that the latter can do whatever he wants to do with this necklace and moves from there. He collides with someone and he drops the love letter. Suraj takes it and tells him that he also gave love letter to someone today. Veer tells him that, that girl must be naive but she won’t accept his proposal no matter what. Suraj tells him that she will accept his love for sure. Veer asks him to stay away from his family and leaves from there. Suraj asks the jeweller to pack the necklace.

Rani meets Vijaya and asks her that why the latter called her. Suraj comes there and asks her that did she read it. She gets confused hearing him. He gives the necklace to her saying that it’s surprise gift for her. She refuses to take it. Vijaya asks her to keep it with her because it’s a gift for helping her to buy that land. Rani accepts it and thanks them. Vijaya leaves from there. Rani thinks that they spoiled her mood. She receives Veer’s message and learns that he is bringing icecream for her tonight and smiles.

Later, Rani hides the necklace in her home. Rajmata asks her did the latter talked to Veer because he didn’t reach home yet. Rani asks her to get some rest and she will stay awake. Meanwhile Veer buys icecream and reaches home. He notices that Rani slept in sitting position. He apologizes to her for coming late.

Next day, Rani and Mausaji waits for Vijaya in registry office. Sagar gives the land papers to Rani. She hopes that everything will go according to her plan. Meanwhile Veer wakes up and notices that Rani left already. He finds the necklace which Rani hided and confirms that Suraj brought this one for his lover. He wonders that what exactly happening. Mausaji tells Rani that original registrar will do overtime today which shocks her.

Vijaya reaches the registry office. Rani’s neighbor sees Rani with Vijaya and wonders that why Rani talking with Rajavat’s enemy and leaves from there. Rani thinks a way to stop Vijaya from entering the registrar’s room. She acts like she is feeling dizzy. Vijaya helps her to sit and gives juice to her. Mausaji sees them and thinks that Rani will handle Vijaya for 30 minutes.

Rani’s neighbor meets Rajeshwari and informs her about Rani and Vijaya. Rajeshwari leaves for registry office. Kajri overhears their conversation and decides to warn Rani. Rani drops her mobile and it’s stop working. Kajri calls Rani but no response from other side. Then she calls her father but no response from him too. On the other hand, Rani calls original registrar from landline and lies to him that theft happened in his home so he leaves from there.

Vikram tells Rajeshwari that they can’t suspect Rani. Rajeshwari calls Veer and asks him to reach registry office. She asks the auto driver to drive fast. Meanwhile Other registrar enters the room. Then Vijaya enters the room. Mausaji gives the land papers to Vijaya. Vijaya’s lawyer comes there and reads the land papers. Vijaya praises about her lawyer’s skill. Rani prays to God.