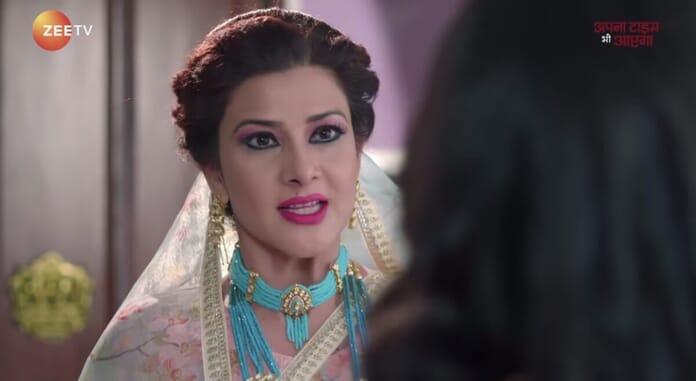 Zee TV popular show Apna Time Bhi Aayega is ready to witness some interesting plots and dramas in the show. Earlier it’s seen that Rajeshwari played a master card which resulted in Veer’s medical licence getting cancelled. Now it will be seen that Rajeshwari will learn a shocking truth that Veer is none other than her own son with Ranvijay.

Previously we have seen that, Rani hid the truth from Veer upon Rajmata’s insistence. Rani learnt from Ramadheer about Veer’s father Ranvijay. Rajeshwari planned against Veer using Jai. She made Ranvijay’s condition worse which resulted in immediate surgery.
Jai spiked the kheer given by Nandhini to Veer and Veer felt dizzy in operation theatre. However he still successfully completed the operation. Media people arrived there upon Rajeshwari’s plan and Veer was proven drunk before operation. Veer’s medical licence got cancelled shattering him. Rani suspected Jai behind this and decided to prove Veer’s innocence.

In the future episodes we will witness, Rani will search for the person who’s responsible for Veer’s condition and will learn a shocking truth that it’s none other than Rajeshwari. Rani will find out that Rajeshwari did that in order to teach a lesson to Veer.
On the other hand Jai will emotionally manipulate Nandhini after she learns that he spied on her family. Rajeshwari will finally get to witness Ranvijay’s face and will be utterly shocked. She’ll try to throw him out of the house only to be stopped by Rajmata who will reveal that Veer is Ranvijay’s son whom she gave birth during her coma. Rajeshwari will be shattered upon hearing it while Veer will confront Rajeshwari for spiking his drink.

What will Rajeshwari do now after learning that Veer is her son? Will Veer forgive Rajeshwari for playing with his career?