Zee TV popular show Apna Time Bhi Aayega is ready to witness some interesting plots and dramas in the show. Earlier it’s seen that Veer offered to help Rani with Ramadheer’s store while Birju was against it.

Now it will be seen that Veer will announce about Rani and Birju’s marriage in front of everyone shocking Rani.
Previously we have seen that, Veer tried to remove the nuptial chain himself but Rani stopped him. They both fought when Dadi came there.

She scolded Rani for fighting with her husband and Veer supported Rani that she’s his friend. Dadi asked Rani about Ramadheer’s store when Veer offered to help Rani. Birju and Rani was against it as they don’t want Veer’s help. Later, Rani found their stores area being occupied by few goons and got shocked.

The goons harassed Rani while Veer came for her rescue.
In the future episodes we will witness, Veer will save Rani and they both will get hurt. Veer will bring Rani home and Dadi will panic seeing their state.

Veer will apply medicine on Rani despite her protest stating that he’s doing it for Ramadheer. They both fight with each other while Veer will make a shocking move. He will play the drums and will announce about Rani and Birju’s marriage in front of Ramadheer and Dadi shocking Rani.

How will Rani handle the situation? Will Veer realise the truth before it’s too late?
All these questions will be answered in the upcoming episodes. 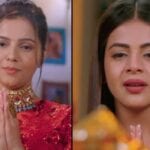