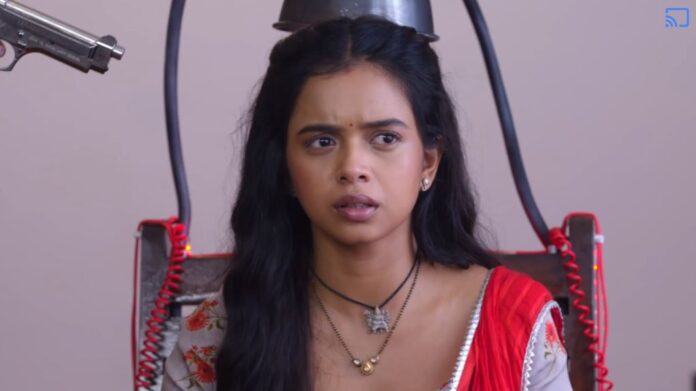 Zee TV show Apna Time Bhi Aayega never failed to engage audience with its gripping storyline. Now, Veer found Rani so it will interesting to see how he is going to rescue her from Kidnapper.

Earlier its seen that, Vikram consoled Veer saying that nothing will happen to Rani. Birju brought one of the Goon from the Kidnappers gang. Veer threatened the Goon to reveal Rani’s location if he want to stay alive then and beat him. Goon revealed that his Gang took Rani to Goa. Veer found one visiting card from the Goon and learnt that Kidnappers took Rani to “Riva beach resort”. Birju prayed to God to reunite Veer and Rani. Kiara learnt that Vikram and Veer going to Goa to rescue Rani and she decided to accompany them. Veer tried to convince her saying that Rani’s life in danger already and he can’t put her in danger too but she was adamant with her decision and they reached Goa resort.

Veer saw two people and noticed their bracelets and recalled how he saw same bracelet in Kidnapper’s hand and he informed about it Vikram and they followed those two people and knocked the door. Kidnapper confronted Veer and asked him to win against him in card game to save Rani. Jai said to Veer that he will help him. Veer agreed to play. Kidnapper asked his ally to bring Rani. Veer got emotional seeing Rani and untied her. Kidnapper made Rani sit on the electric shock chair and explained about game to Veer.

In the upcoming episode, Kidnapper will have more chances to win the card game against Veer. Veer will be in dilemma to what to do next.

Will Rani help Veer in the game? What will be Veer’s decision?

To know what will happen next in your favorite show Apna Time Bhi Aayega , stay tuned to this space.