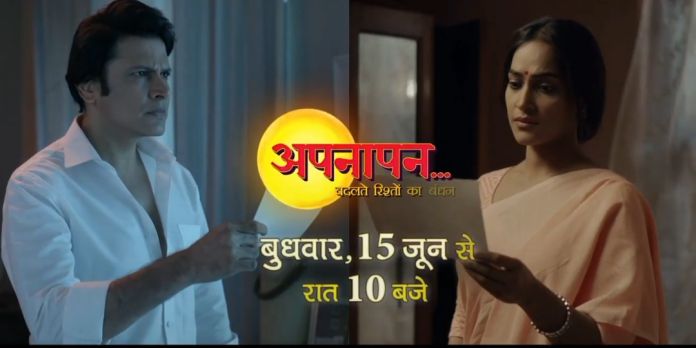 Episode begins with Pallavi saying how Nick just supported his kids. Neighbours taunt them. Mana asks Badal to say something. Badal says It’s my dreams to come in the list of best chefs, Nick is idol for me so je is my guru. Everyone claps. Nandita feels upset. Media asks we have heard Nick is alcoholic. Pallavi says I am his ex wife, normally it’s not difficult for an ex wife to prove such negative points but with Nick it’s not true, he was not and is not alcoholic. The neighbours ask if Nick is so great then why are you marrying Ranveer? Media says the question is right.

Nick says there are many questions already asked, but is it fair to raise questions on Pallavi’s character just because of her neighbour, Pallavi has raised her kids single handedly and raised them so well, and the question about Badal is already clarified. Nick says I will clarify another thing as well I have been far from Badal but as every father I also wanted to pass my legacy and I always wanted him to succeed, I see the same passion in Badal so my cafe is his. Harsh and Nandita are shocked with this. A media person says I am also a single person I can understand what you are saying.

Nick calls Badal on stage and says from today this cafe is of Badal’s please applaud for him. Everyone cheers for him except Harsh and Nandita. Harsh leaves. Nandita gets upset seeing the kids with Pallavi and Nick. Lolita and Shanky also celebrate. Neighbours says it’s so great to see Nick think so much about the kids, but after you marriage the kids will stay with you or Nick? Mana says why are you so involved in this, I think you mistake this like one of your kitties but this is a press meet. Nick says I am answerable to my kids only. Neighbour says you have to answer to the society as well. Gagan says our dad is always there for us. Here, Dadi enjoys watching the interview. Shanky and Lolita see Pallavi and Nick with two kids each so they decide to divert it by offering everyone food for tonight. The reporter informs Rastogi that the family saved Nick. Rastogi thinks and advises something in muted.

Nick is standing aside when Nandita comes and says were you serious about giving the cafe to Badal? It’s not fair, you should have discussed with me, maybe you are becoming an emotional fool. Nick says let me handle this don’t worry, it’s for my family. Nick goes and Nandita gets upset. Shambu gets hyper in the kitchen. Pallavi laughs seeing it and assists. Shambu asks Pallavi to smile always. Lolita takes Pallavi aside and says you should stay happy only. Pallavi says when I think of court case I fear the outcome of it. Lolita says I feel someone is creating confusion for you. Pallavi looks on.

Here, the kids discuss on whom they should stay with. Mana says Gagan I feel you want to come with dad for his money but what about mom? Barkha says it’s our decision, mom has taken her marriage decision without thinking too. Badal says let’s calm down. Mana says I was also upset with her discussion but I feel she has right to live her life to fullest. Gagan says let’s not talk about this so let’s just celebrate for Badal. They all cheers. Here, Pallavi and Nick cool together and assist the staff. Nick sees Pallavi feeling sensless so he gives her water. Shanky and Lolita see them and adore them and talk about how they always proof that they are made for each other. They both praise their respective friends. They go to handle media.

Later, Pallavi goes and takes rest. Ranveer gives her coffee and handkerchief to clean herself. Pallavi thanks her. Nick sees them smile and talk and feels wierd. Tea falls on Nick due to him getting distracted. Nandita wipes him and asks him to come. Nandita explains Nick to take care of himself and don’t let yourself get affected, take these custody papers and on monday it will be fun to watch Pallavi. Nick realises how Pallavi saved him. Nandita still talks negatively about Pallavi. Nick goes and decides to talk to Ranveer.