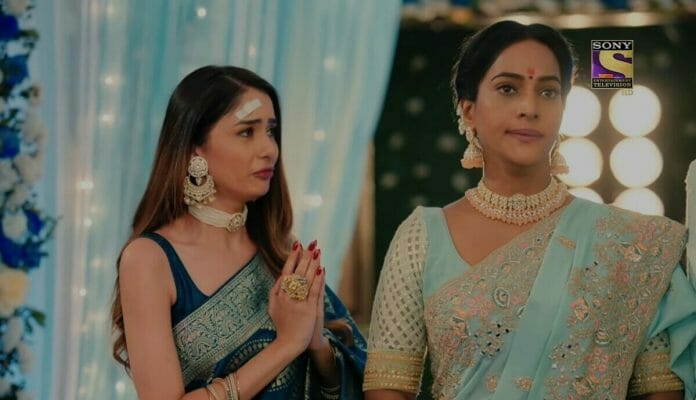 In today’s episode, Mana is asked to bring the rings for sagai, Mana goes but finds the boxes empty. Everyone worries about the ring. Pallavi calms everyone and suggests to make rings out of tulsi. Dadi gets impressed while Nick doubts if he has understood Pallavi wrongly regarding the custody matter. Suddenly, they all hear an accident noise outside.

Nick sees Sonali injured in the car and picks her up. Pallavi goes into shock seeing her. Sonali is taken inside and she gets conscious. Nani gets concern for her and scolds her for leaving them all. Sonali tries to hint them all about Pallavi being upset with her but Nick tries to divert the matter.

Nick assures that Nani and Dadi don’t get to know of the truth. Later, Pallavi feels helpless so Nick consoles her. Pallavi sees Sonali wear a saree that Nick gave her so she feels helpless and leaves the house. Sonali sees Nick alone so thinks to give him support.

Badal goes to find Pallavi, he finds her in a dizzy state so makes her sit and calms her down. Ishan is seeing confronting Mana about her feelings for him which Mana denies. Later, Badal brings Pallavi home. Pallavi sees Sonali near Nick and feels angry.

Sonali pretends to be sorry and says she will leave the house. Nimmi taunts her for being a widow. Dadi stops Sonali and asks her to stay with them. Pallavi gets upset while Nick tries to console her.

Nandita asks Dadi to do a ritual which is done by bride’s sister. Dadi makes Sonali tie a thread on Nick and Pallavi’s hand for them to stay together.

In the upcoming episodes, Sonali will be seen tying her hand with Pallavi and Nick’s in the sagai ritual. Dadi will announce about the marriage date.