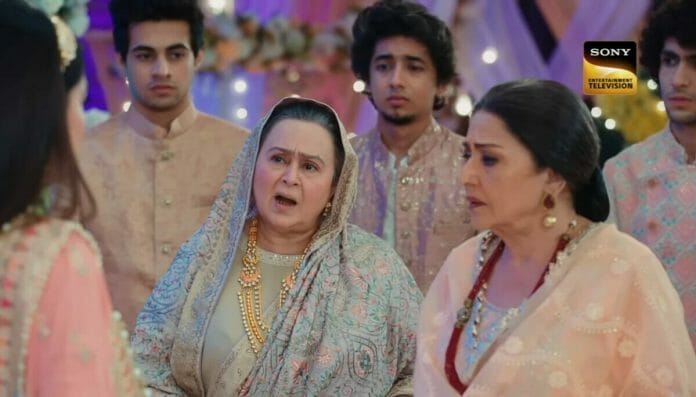 In today’s episode, Dadi sees the letter and accuses Pallavi infront of everyone. Pallavi tries to justify herself that it was for Nick but no one believes it. Nick also puts out the havan flame and goes angrily. Sonali thinks now it will be her chance to marry Nick. Nick brings Ranveer’s doing out in public by making the waiter tell the truth. Nick reveals he did drama to reveal the truth of Ranveer. Nick asks everyone to resume the wedding.

Pallavi gets happy while Sonali gets upset. Later, Sonali and Nandita are upset with their plan failing while Pallavi is happy to marry Nick. Pallavi is in her room, when Sonali comes with a knife and threatens her to reveal one of her biggest secret to Nick. Pallavi feels scared of the after effect if the truth is revealed.

To make her point strong, Sonali shows Pallavi a lady whom Pallavi recognises as a nurse. Nick gets ready and is in the mandap where everyone asks for Pallavi. Nick goes to room to see Pallavi who is in normal clothes. Nick is shocked to see Pallavi not in bridal wear. Pallavi informs Nick that she can’t marry him.

Nick is shocked. Nick tries to convince Pallavi but she gets adamant and asks Nick to marry Sonali. Nick gets upset and agrees out of anger. Everyone gets shocked to know about Nick marrying Sonali. The kids also get disheartened. Dadi blames Pallavi for ruining their family name by making marriage a joke.

In the upcoming episodes, Pallavi will sacrifice her love for her family and Sonali will get married to Nick. Dadi will realise how big sacrifice Pallavi made.