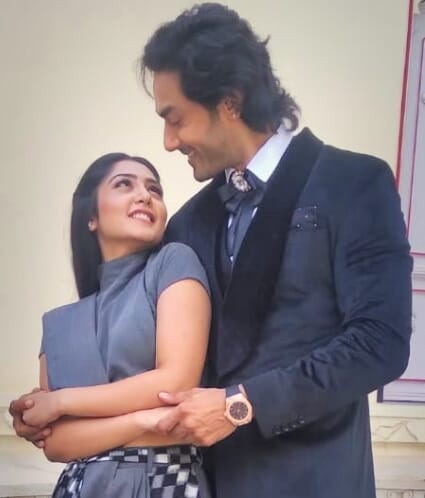 News of upcoming show ‘Tere Bina Jiya Jaaye Na’ is making hot buzz as large set of audience is waiting for Avinesh Rekhi to romance Anjali Tatrari. The few bts have taken over the interest and now the first look of actor in a romantic pose captured the audience heart already. The eye-lock of the upcoming couple ‘DEVISHA’ is proving duo Jodi is hit and will get maximum hype. Sharing the first picture both Avinesh and Anjali captioned ‘Tere Bina Jiya Jaaye Na’ hastag #DEVISHA.

Fans poured their comment section with the best wishes. They quoted their excitement. ‘Prettiest’, ‘Wow’, ‘Beautiful’, ‘New Couple alert’,  are the top comment on DEVISHA picture. While few commented ‘Love is in the air’. Well, there is no denial that both Anjali and Avniesh is looking charming. Check out the post here!

Avniesh has ruled the ITV for 2 years by portraying the character of ‘Sarabjeet Singh Gill’. His fans base increased with leaps and bounds seeing his stint in ‘Choti Sarrdarrni’. Rekhi’s fans were upset when the show producer asked him to play father of Nimrit Kaur Ahluwalia. Avniesh quit the show post the time leap in Choti Sarrdaarni. Actor will now play a character of Prince. Undoubtedly, he will rock heart with his top notch performance in the show. Fans can’t wait more for ‘Tere Bina Jiya Jaaye Na’. The show is expected to go on floor by the month of October. But before that show is already getting fanfare and pictures of Anjali and Avniesh is earing separate fan base.

Anjali Tatrari was last seen in ‘Mere Dad Ki Dulhan’. That hatke show was hit on Sony TV. Anjali’s character ‘Niya’ got huge praise from the audience. Now fans are excited to welcome her back on their screen with Zee TV ‘Tere Bina Jiya Jaaye Na’. actress seems equally excited for this upcoming.

Tell us if you all are waiting for ‘Tere Bina Jiya Jaaye Na’.