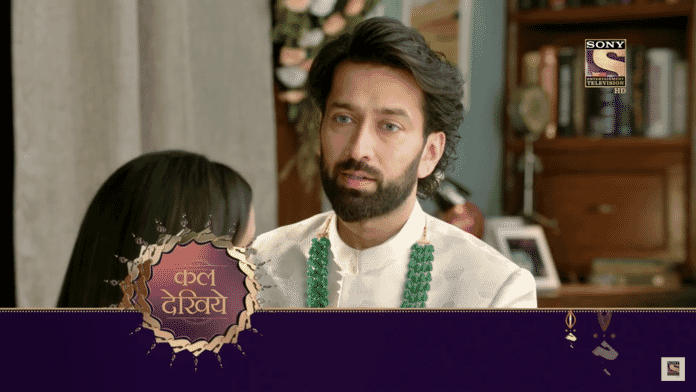 Episode begins with Ram saying I couldn’t take a shower well, we forgot that our marriage happened, its okay, it will take time, its new for me also. She asks why are you staring at me. He says I will never forget that we got married, because of sindoor. Meera says Ram will like the parathas, I have made cold coffee for him. Sara comes and says I got fresh bread for Ram. Mama says someone give me tea. Mami gives the tea. She asks where is Akki. He says he would have gone on jogging. Meera asks Sandy to wait, Priya and Ram will come on their own, call Akki. Sandy calls and says his phone is off. Mami worries. Sara says he will come. Ram keeps the towel. He goes and greets everyone. Mama asks did you sleep well. Ram says yes, I will go and check, mechanic is coming, I will be back. Mami asks them to find Akki. Priya asks what’s happening.

Mami says don’t know where did Akki go. Meera says calm down. Sandy says Mami is right, Akki went for some audition, he got a mail from a producer. Priya says its his marriage today. She checks the mail. She says we will find him. Ram comes and says car isn’t starting, I will call Adi. Meera says breakfast is ready. Ram says I will have parathas also. Sara says mum made it for you. He asks why is Priya jealous. Mami says she is jealous, everyone is pampering you, that’s why. Ram sits. He asks Priya to have the paratha. Ram says I have a right on your parathas, some people would be jealous. Meera smiles. Ram asks where is Akki.

He asks is there any problem. Priya says something is burning, really. They go to check. Priya sees the smoke in the room. She asks Ram to open the window. Ram opens the window. He says I will ask Tarun to arrange an electrician. Mama says no need, electrician is here, he will check. Ram argues with the man. He asks shall I call my friend. Priya says its okay, this electrician knows everything. The man says geyser got burnt. Ram says how can it burn. Priya says it gets damaged if you don’t switch off the power supply, didn’t you switch it off. Ram says no. Priya asks the man to change it. Ram says sorry. Meera says its okay. Ram says fix an automatic geyser. The man says Priya knows it, who are you. Priya says he is my husband, keep a normal geyser, no need to spend much, we won’t stay here for long. Ram says fine then. The man goes.

Raj says Akki is here since 2.5 hours. Mama ji talks to him. Shubham asks Raj to stop nonsense. Raj updates him. Shubham says plan is working, Akki wants to do the work, he chose work, not marriage. Nandini says Akki shouldn’t come, Shiva and Ram will know that family’s truth, Ram would be knowing about this already. Meera says we have to tell Ram. Sara says take Ram home. Priya says I know that production house. The man says I have fixed the geyser. Priya pays the money. The man goes.

Meera asks Ram to have breakfast. Ram says yes, I m hungry. Priya asks what will we tell Ram if he asks for Akki. He likes the food. Priya says I will stay here today and come in the evening. Mami thinks Ram may refuse her, just she can find Akki. She asks Priya to stay back. Ram offers help. Meera says but you have work in your house also. Ram says I can help. Mami says ice box is needed. Ram says you kept the ice box to cool the air for me. Priya says nothing, we don’t want any ice, I will order, you go home. Ram says fine, I will go home.

He asks Sandy to call him if there is any work. Ram leaves. Priya says Mamaji and I will go to the production house. Shivi gets ready. Mami asks did you talk to Akki. Shivi says no, I have to get ready, couples these days give space to each other. Mami taunts her about Akki. Shivi asks her to talk to Akki. She calls Akki. He doesn’t answer. Shivi calls Sandy. Sara and Sandy compliment her. Shivi and Mami ask where is Akki. Sandy says he went on jogging to get a glow, you can’t see him, its abshagun, get ready, we will also get ready. Shivi says okay, I will talk to you later. Mami says what’s all this, who believes so.

Priya and Mama ji reach the production house. Sarika Mami calls him and asks him to take Akki at any cost, Akki and Shivi should get married. Priya takes the phone. Mami says we were so worried when Ram left the mandap yesterday. Priya says we will find Akki. Raj hides and looks on. She thinks who is there.

Precap:
Adi says we want to tell something. Ram says everyone was getting ready. Meera and family come. Ram asks where is Akki.