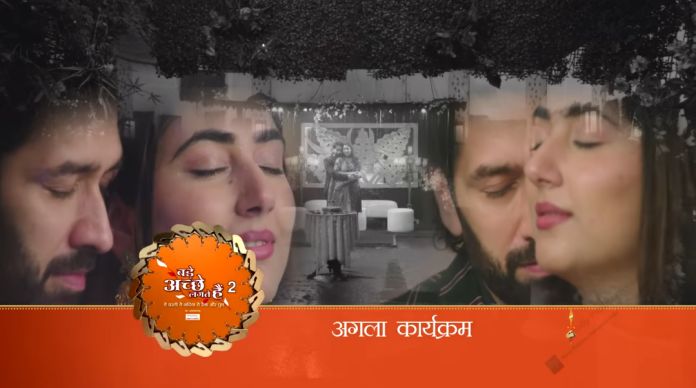 Episode begins with Nandini crying and Priya finds a chance and goes. Nandini says today I have to do drama and show Priya how Ram will select me over her when I get a panic attack. Here, Meera asks Krish if he went to buy the dress? Krish says yes but I couldn’t get it. Ram says maybe because you got late. Krish says you hate Priya so much then why did you got it? Ram says I wanted to keep Priya happy for the deal. Meera goes. Ram says why are you so affected, you don’t have any right on Priya. Krish says I know I am not her husband but neither are you. Just then Priya comes and takes Krish to talk to her alone.

Sandy comes to Ram to discuss on Priya’s party. Ram thinks looks like Priya wants to celebrate with Krish alone. Ram goes to see the arrangements. Pihu thinks I came to give thank you card to Ram. Brinda arranges the terrace and tells Ram how the arrangements are done as you and Pihu want under the stars. Brinda says it’s so cute. Ram says I just have to do this because of the drama, Priya and I had something but all was lie that is why it ended and now I have to do all this.

Pihu listens to this and says you were making my mom a fool? Even me? Ram says no I just said that in anger. Pihu says no I don’t trust you, I came to say thank you to you as I thought you are really my mom’s prince charming but I was wrong. Ram says no I really wanted to do all this cupcake promise. Brinda adores him being a kid with Pihu. Ram says I can become anything you want.

Nandini sees this and starts acting to faint. Ram goes to her and makes her seated. Ram panics and asks Brinda to call Shubham to call doctor. Pihu says don’t worry. Ram asks if Pihu can bring the medicine from her room? Nandini thinks this is just a trailer and Ram left Pihu. Pihu goes and brings the medicine. Pihu hugs Ram and says god is just testing us everything will become better I will pray for your mom. Ram hugs her back. Nandini again calls for Ram.

Priya comes and Pihu goes to her. Doctor comes and calms her. Shubham asks about the party. Ram says nothing is more important than Nandini. Nandini says I am sorry I am ruining your plans. Ram says nothing is more important than you. Doctor says let’s give you injection. Nandini worries. Priya thinks why is she worried? Is she acting? Or maybe she is having anxiety. Shubham says okay let’s not give injection to her. Shubham take her. Nandini apologies to Priya for not being able to attend her party. Priya thinks maybe she is really ill and maybe Shubham is doing it alone.

Sandy comes and tells Ram that she told everyone about Nandini being ill and everyone went after the mehendi. Ram goes. Priya says Krish is downstairs I am going she asks Pihu. Pihu says she will not go. Brinda sees Pihu sad and says you are sad because Priya’s party got cancelled but a birthday has 24 hrs so it’s okay if fee hours go like this we will make rest of the hours special. Pihu says okay. Brinda feels bad for Pihu.

Priya comes to Krish and informs him this. Priya says let’s do something tomorrow. Krish says why are you not celebrating and thinking so much about Ram? You have done enough. Priya says but it doesn’t seem good and if the blackmailer saw Ram and Pihu close they might do something. Krish says don’t overthink and let’s celebrate and if not that then let’s go to Sara and all atleast spend it with special people. Priya says okay, let me go and see Pihu. Priya thinks to know how is Ram. Ram brings Nandini to room. Nandini asks Ram to go and talk to the ministers it’s important. Ram says okay. Shubham is with Nandini.

Shubham asks Nandini what is going on? Nandini says I decided long back that I don’t want this party to happen. Shubham says we did this for ministers. Nandini says you are just thinking that but I am seeing what if Ram gets to know Pihu’s truth then we will get ruined. Shubham says then what should we do? Bring Priya to our lives? Nandini says no, do the interview tomorrow anyhow and let’s get rid of Pihu and Priya. Nandini says this time also I will only win.

Precap – Ram and Priya are in terrace. Pawan comes and tells how Pihu fainted as she took Nandini’s medicines. Ram and Priya worry. Nandini sees the threatening messages and thinks who has sent these messages? Did really Ishan push Shivi?