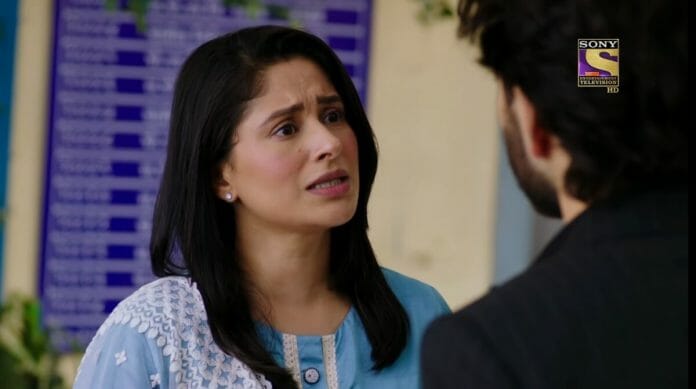 In the on going track, Shivi starts doing as Shubham said and asks Ram to pick her up as the Soods are treating her bad. Ram gets worried and thinks to get Shivi. Shivi asks Akki to leave with her but he remains silent. Shivi provokes Ishan and Sara tells Ishan about he being only her son and not Varun’s Ishan gets disturbed. Later, Priya tries to stop Shivi but she doesn’t. Ishan pushes Shivi and she falls off the stairs. Ram tries to wake Shivi but she dies. Ram asks Priya how did this happen. Priya thinks I have to protect Ishan so she says Shivi was going and I was trying to stop her when she slipped and fell, it was by mistake. Ram says I know you can’t do something so careless, please tell me whom are you trying to protect? Priya says it was a mistake. Ram makes the police arrest Priya. Here, Nandini gets devastated to hear about it and asks Ram to punish Priya and do justice for Shivi. Ram gets sad and confused on what to do. Later, Ram does last rites of Shivi and doesn’t let the Soods come. Here, Priya makes Ishan promise not to tell the truth that he pushed Shivi. Krish understands how Priya is trying to protect Ishan so he says he will make Priya come out. Krish tells Priya to do a pregnancy test. Priya finds out, she is pregnant. Priya denies to meet Meera and blames her. Brinda decides to meet Priya on Ram’s behalf. Later, Nandini picks up the call of Priya where she informs Ram about her pregnancy but she makes more distance between them by ordering the lawyer to fasten the case of Priya. Seeing Brinda coming instead of Priya, she feels like Ram doesn’t care about her pregnancy. Priya waits for Ram to come. She gets the permission for another call so she goes just then Nandini comes and asks Priya to tell Ram that the baby is not his but Krish’s. Priya gets threatened by Nandini. Later, when Ram hears the news of Priya’s pregnancy from Priya and comes to meet Priya, Ram is shattered to know Priya cheated. Ram doesn’t believe Priya and asks for a paternity test. Nandini comes and forbids Ram to have any contact with Priya and takes him with her. While, Priya cries. Ram denies to believe that Priya cheated but Nandini asks him to move on. Priya assures the kid that she will raise the baby just like Ram.

In the upcoming episodes, leap will be shown with Priya and her daughter enjoying rain.