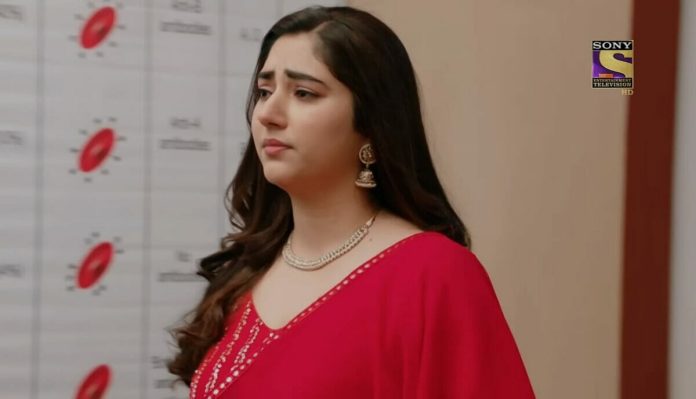 In the on going track, Priya gets happy and thanks Ram for the dress. Pihu thinks Krish got the dress. Later, Vedika sends a threatening message to Priya but instead of Maitri, Priya falls.

Priya is about to fall when Ram catches her. Everyone make the ministers believe on Ram and Priya’s love. Nandini says the slip was due to Ram’s muddy feet. Priya thinks why is Nandini lying?

Was Maitri her target? Here, everyone gets to know that Ram got Priya her dream dress which shocks Pihu. Priya goes to Nandini’s room and finds her medicines in dustbin which shocks her. Priya escapes from the room as Nandini comes to room.

Nandini thinks to fake an attack to make Ram chose her. Here, Brinda does the arrangements for Proya’s surprise. Ram comes and is upset over seeing Priya with Krish so he says he is acting for this deal.

Pihu hears it and gets upset. Ram then tries to apologies to her and make her beleive how he said all that in anger. Nandini sees Ram with Pihu and acts like fainting. Ram worries. Pihu calms Ram and brings Nandini’s medicines to help Ram.

She hugs Ram and calms her. Nandini gets upset seeing it. Doctor comes and advises for injection but Nandini makes herself escape the injection with help of Shubham. Later, Ram cancels the party as Nandini is unwell.

Pihu gets upset so Brinda makes her plan something tomorrow. Here, Nandini asks Shubham to make the interview happen tomorrow so that Priya and Pihu go from Kapoor mansion. Later, Ram and Pihu plan a surprise for Priya and they like it.

Pihu sees them happy so she goes downstairs to give them space. Pihu gets restless so she takes medicines. Tarun informs Ram and Priya that she took Nandini’s medicines. Both of them worry for Pihu and drive her to hospital.

Priya panicks while Ram calms her down. Nandini finds out the truth of Ishan from Vedika. Nandini is shocked to know Pihu took her anxiety medicine and Ram took her to hospital.

Nandini asks Shubham to stop the doctor from revealing how her medicines are fake. Shubham goes and successfully talks to the doctor but it is shown how before Shubham went Priya already got to know from the doctor.

In the upcoming episodes, Doctor will inform Priya about Shubham asking him not to reveal the truth. Later, Priya will try to sort a fun fight between Ram and Pihu but will end up falling on the bed with Ram.