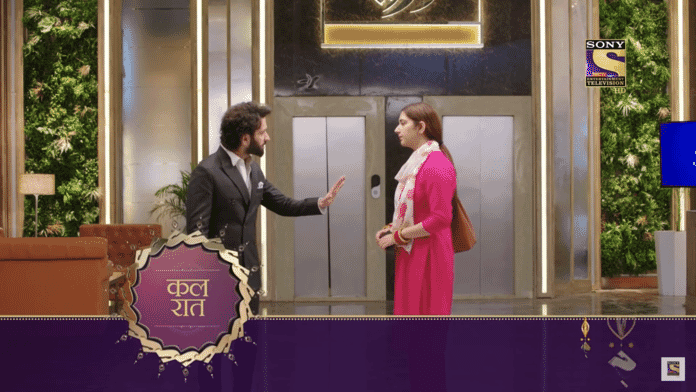 Bade Achhe Lagte Hain 2 is Sony’s new trending show. With viewers looking forward how will Ram and Priya unite, the chances one of them will sign the annulment breaks the heart of many fans. The misunderstandings of Ram and Priya due to having different thoughts over Shivi and Akki’s marriage, is still not resolved. The show is appreciated for its cast and fast running tracks, which the viewers are liking. The chemistry between the main lead is amazing and a delight to watch.

In the current track, Brinda asks Ram to go and break Priya’s fast. Ram is about to go when Shivi comes to inform Ram she ia going. Nandini calls Ram for doing it grand way. After that Nandini shows the annulment papers to Ram and shows how Priya signed it while he went to save her dad. Brinda watches this from far. Nandini convinces Ram to sign as it’s for his own benefit as she cannot see him getting used by others for his goodness. Ram first tries to reason out but then gets convinced. Ram is about to sign when Brinda will pretend to accidentally spill water over the papers. Nandini gets furious. Later, Ram goes to Priya and they break each other’s fast. Next day, Priya decides to go to her mom’s place. She packs and is about to leave when Ram says you can stay here as annulment papers have not been signed yet. Priya says what’s the use when someday it will. Ram feels confused whether to trust Vedika telling about Neeraj and Priya or Priya. Later, Nandini is shocked to know Media got hold of Ram and Priya’s annulment papers. They try to spice up the news and defame Kapoors. Shashi enjoys the drama while Ram gets surprised. Here, Meera comes to temple and prays for her daughter’s good and happy life. Later, Media gets to know about the annulment and tries to portray Priya as a victim. Nandini and mami blame Priya for the leaking of papers. Media questions Sara. Priya asks Ram to stop the Media drama. Here, Media questions Meera about how did she let her daughter do contract marriage. Meera is shocked to know Ram is planning to leave Priya. Ram reaches to Meera on time to save her from media. Nandini feels why did Ram had to deny the annulment thing and decides to go to Sood house and make Meera know about the truth. The lady praises Ram and Priya knowing their story. Later, Nandini gets to know Adi leaked the papers.

In the upcoming episodes, Priya will say I thought to show papers to the lawyer, it leaked because of me. Neeraj will say I have the lawyer’s number. Nandini will fill Ram’s mind against Priya. Neeraj will ask Priya to get back his job. Ram will think I don’t like Neeraj, but she took his help.