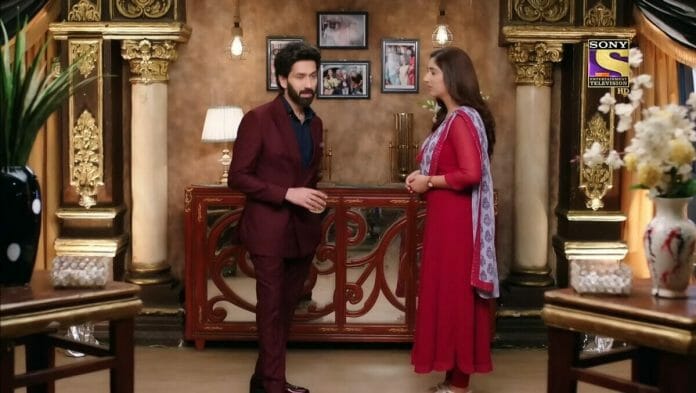 In the on going track, Shubham suggests Ram to call Meera as ma and ask her to do the path for publicity. Ram does so, and Meera gets overwhelmed. Later, the minister taunts on Ram to Priya so she says how Ram is a great husband. Kanika raises questions on Priya not wearing sindoor.

So Ishan says there is a ritual in the puja when Ram has to fill the sindoor. Ram and Priya are hesitant but for the deal they decide to do it. Nandini and Vedika are angry and feel everyone is involved in this plan. Pihu decides to make a card for Ram saying sorry.

She secretly leaves for Ram’s house. Later, Ram puts sindoor on Priya’s forehead and Pihu sees it. Priya faints so Ram worries for her while Pihu blames Ram. The minister calls all this a big drama while Ram gets furious on him to be so insensitive.

Vedika gets upset seeing Priya come closer to Ram. Sara and Vikrant think to convince Priya to stay here for few days with Pihu just to save the deal. Priya wakes up and tries to make Pihu agree to stay with Ram to help him. Pihu is reluctant but agrees for Priya’s sake. Ram listens to all this and thinks highly of Priya.

Nandini pacifies a angry Vedika. Later, Nandini take Priya to her room and threatens her that if she makes Pihu get close to Ram then she will tell Pihu about her two years in jail and shows her newspaper articles. Ram tries to bond with Pihu so that she can help him in the interview but Pihu gets upset instead.

Priya tries telling Ram to give some time and space to Pihu as she is a kid. Later, Pihu and Priya go to the amusement park but it is closed due to rain. Ram hears how Priya and Pihu are out in such heavy rain so he goes to bring them. Pihu denies to take his help.

Ram somehow manages to convince Pihu and as soon as the rain stops Ram decides to take Pihu. Priya adores the moment but remembering Nandini’s words she avoids getting Ram involved with Pihu. Here, Vikrant informs everyone that they will all go to Meerut to his hometown.

Later, Sara will take Sandy aside and ask her not to let others take credit of her work like Shubham is doing. Sandy says how Ram never terminated her she being Priya’s sister, so she can do this. Here, Ram arranges the amusement park at a indoor location. This excites Pihu and Priya makes Pihu get friends with Ram.

In the upcoming episodes, Pihu will tie Ram while Priya will try to convince Pihu that Ram is a good man. Pihu will ask Priya the reason why she trusts Ram. Priya will say how Ram is her prince charming.