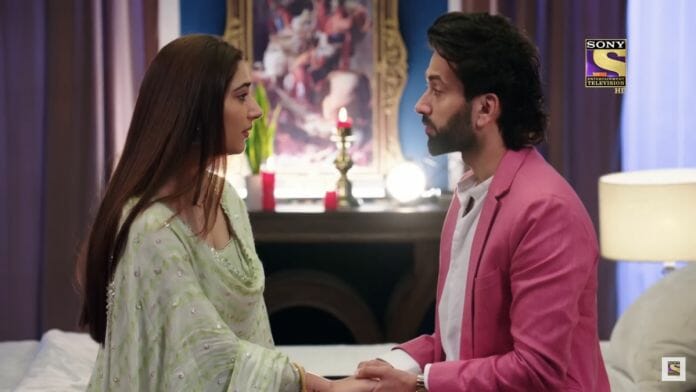 In Bade Achche Lagte Hain, with Ram doubting if his dad’s accident was planned, a stranger comes forward to help him. What truths will come to light and how will it affect Ram and Priya? It will be interesting to watch what is in store for the couple Ram and Priya?

In the on going track, Priya also shares her fear that she has, about Ram getting fed up form her. Ram makes Priya assured it won’t happen. They try to know each other more and pacify each other. Later, they go to meet Krish. Here, Varun is asked by Shashi to go on the trip with Ram and his family. So, Varun sends Ishan to Ram and knowing from Ishan that Varun id not ready for the trip, Ram talks to Varun and convinces him. Priya’s wound got from nail gets septic so doctor asks her to not wear the bangle in this hand. Ram worries and cares for her. Later, the family enjoys the party while Ram successfully takes the bangles away from Priya for her faster recovery but Priya gets stubborn and takes the bangles back. Next day, the family reaches Alibagh, Krish is in the resort as bar tender. Later, Nandini shares with Priya how she feels Ram is going far from her. Priya tries to console her. While, seeing Ram and Ishan bond, Varun feels he is being played by Mahender while Ishan is going away from her. Later, Varun is threatened by Shashi to not to double cross him. Here, Priya tries to talk to the manager so Ram asks her not to as it can be dangerous. Nandini asks Ram to take Shubham and Priya with him to talk to managers. Later, Krish monitors the CCTV to keep a watch if Shashi is coming to the resort. While, Priya and Ram spend some quality moment when Ram confesses his love for Priya. Priya blushes but is unable to say the three magical words back. Suddenly, light goes off in Ram’s room which makes Ram worried for security. Varun is behind all this, who by mistake took out fuse of Ram’s room. Varun worries knowing he took out Ram’s room fuse and hides while Krish comes to the fuse room to check and finds its to be suspicious. Ram asks Shubham to book the presidential suite for him and Priya so Shubham does it. Ram gets happy to know Shivi cooked for him specially and gets happy.

In the upcoming episodes, Priya will feel vomiting so Ram will think she is pregnant. Ram will shock Priya and Nandini by announcing this infront of all.