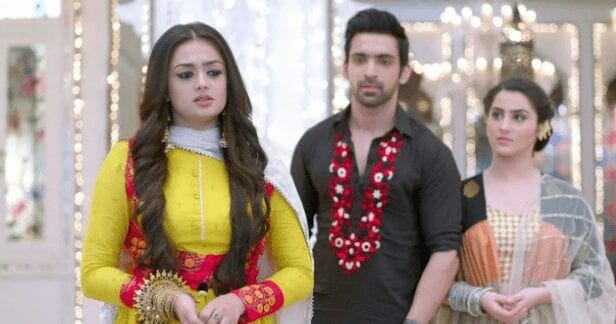 The episode starts with azaan beside the begum sahiba, singing a lullaby for her so that she could sleep. After him leaving the room, Noor enters the room and sits besides begum sahiba. She tells that she does not have to worry at all about anything. She is here to make everything better. She says that at first she has to better azaan and his condition as he is deteriorating himself. The past day she made him sleep and today she is going to do something else. After talking to begum sahiba, she goes to Azaan’s room and talks to him. Amidst their fight, both of them collide and their lockets get stuck between each other.

Azaan separates the two. Noor later tells him that his room will be her’s now and he will have to shift to some other room. Azaan refuses to leave but again he had to agree to what Noor says to him. He leaves the room. Later that day Noor meets Khalid and talks to him. They talked about what happened to Rubina after she opened the powder and spilled it all over herself. It was the itching powder and Rubina has been itching all day long and her face has turned all red. Noor and khalid share a laugh over this.

Noor had actually asked Khalid to bring the powder so that she could use it on Azaan and compel him to take bath properly. After further discussions between the two, khalid asks noor her reason to be back, she tells him why she is here. Khalid gets emotional and gets happy too. He asks for a hug from Noor. Noor and Khalid hug each other. Rubina sees them hugging from a distance. She starts abusing Noor in her whispers and says that she is attacking all the men of the mahal.

Here noor asks khalid to not tell anything to anyone to which khalid agrees. Later Azaan goes to a different room and is angry on Noor. He recalls her calling him stinking. He wears a dress and goes down to look for Noor. Noor has mixed the powder in his clothes. She waits for the powder to take action.

In the meantime azaan starts smelling and a few seconds later starts itching himself. Khalid smiles on seeing this and mashooqa and Rubina are puzzled to see this. Khalid suggests him to take a bath. Azaan agrees and goes to take a bath. He tells ballah to heat up water for him.

Ballah goes and here Noor talks to herself that her plan is working on azaan step by step and it will continue like this till he gets better. she even promises to make azaan better like before by looking at shayra’s picture in her phone.