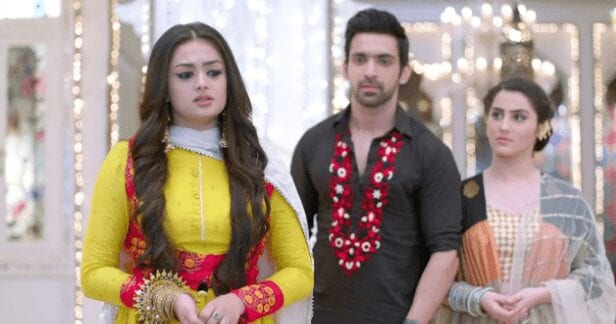 The episode starts with the guy insulting Azaan and asking him to bring his wife the next day. Azaan gets furious on him and slaps him. Noor reaches mahal and goes to begum sahiba’s room. She cries to wake her up and tell her the truth. She tells her that azaan is lying to her about his work. Begum wakes up.

Noor tells her that the world outside her room has completely changed. She takes her on her wheelchair outside. Rubina listens to her talking to begum and sees her taking her outside. Azaan is fighting with the person. He tells him that a person must behave with a girl and when she isn’t interested in talking then nobody should do that. The manager comes and stops the fight. He tells azaan to never indulge with any audience again in the future as per his promise.

Azaan gets a call and gets shocked on something. He leave the club. Rubina shouts in the mahal calling for help. The mahal is in dark when noor brings begum outside. Khalid requests noor to stop doing what she is doing. Ballah and mashooqa too request her to stop. Mashooqa tells her that she has no right whatsoever to do what she is doing. Noor tells her to stop and also that she doesn’t have any right to stop her.

Noor switches on the light of the mahal and shows it to the begum sahiba. She tells her to look around and see that there is nothing around in the mahal and it is empty. Khalid replies to this saying that cleaning of the mahal is on and therefore all the things are kept outside. Noor tells the begum that this is all fake and everything has been hidden from her. The whole family and especially azaan has been lying to her these five years. Nothing is left in the house. Aadil has taken so much credit on her name that everyone has been auctioned. She tells her that she has done a favour on azaan by buying this mahal and letting everyone stay. Khalid and Rubina tries to stop her again.

Rubina tries calling azaan but the call does not connect. Noor tells her that she has bought the mahal from azaan by paying him 1500 crores. She tells that he has still not recovered from his loans and is still neck deep inside it and is lying to her about his job. She tells her that he is not even working properly, sleeping properly and all the time only looking at videos of shayra. She also says that azaan has lied to her about shayra not being in the mahal for the past five years. He has only made her hear the past recorded voice notes of her. She tells her that shayra is never going to return to the mahal. Azaan enters in the meantime and shouts at noor.

Azaan tells her that how dare she talk to his mother like that, noor shouts back at him and says that he does not deserve to be called her son and does not even deserve to shout at her. She asks him that why didn’t he tell her about shayra and everything else for five years.

Azaan replies saying that when some wrongdoings take place then families are to be kept away from it. Noor cuts him in between and says that he has kept her in dark all this while for five long years. She even blames him for shayra never returning to the mahal. She tells him that he is the worst son in the world and an even worst husband.