The episode starts with Shayra and Azaan romancing with each other. Noor and Razia gets confused seeing the children already getting gifts and wonders about it. A new guy enters and he distributes the gifts for the children. Noor gets furious and goes to him to enquire about the same. She starts thrashing him and asks him to leave taking his gifts. Razia enquires the manager and he says that it’s not their date to give away the gifts and Razia gets upset with Noor’s mistake.

On the other side Noor is still asking the person to leave but he calls her clown and keeps mocking her. Noor gets furious at him while he clears to her that she’s mistaken about the date. Noor gets taken aback with the piece of news. Razia sees Noor speaking emotionally with the person and wonders about it and Noor comes to her.

Razia asks what happened and why are you crying. Noor says that she was actually acting to escape and says about the dates being mistaken. Razia says that she understood it and gets shocked seeing the new guy behind her who heard everything. Khalid is discussing about company details with Azaan and Surraiya keeps calling him distracting him. He keeps cutting her call and Azaan asks him to pick up. He picks up the call and asks her to not call her again.

The new guy Aadil gets furious at Noor and casually mentions about her parents and Noor gets hurt. He’s about to leave when Razia calls him and apologizes for Noor’s mistake. She says about Noor and he leaves after making up with her.

Mashuka fills the details about Noor and her stupidity to Shayra and Shayra makes fun of her. Azaan also makes fun of Noor and she throws pillow at Azaan but it hits the matchmaker who comes to visit Razia. Razia welcomes her and she says about a new alliance for Noor. Razia asks about the details of the alliance and she says that the guy is 50 years old shocking everyone. She says that only such type of men will marry a divorcee. She also taunts her for losing her fiancee as well as her mother on her marriage day and calls her unlucky.

Razia asks the alliance maker to leave while Azaan asks Shayra to get something. She goes and gets a file while Azaan signals Shayra. Shayra asks Noor to join but Noor denies. Shayra forces her and she joins. Azaan shows the file and its filled with Noor’s alliance pictures with all eligible bachelors of the city. The matchmaker leaves fuming.

Shayra and Azaan consoles Noor and hears a calling bell. Azaan says that may be its her Prince charming. Noor opens it to find Adil and gets shocked.

Precap : Mashuka says about Noor finding alliance. Noor have a clash with Adil. 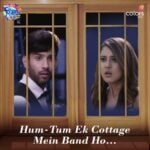