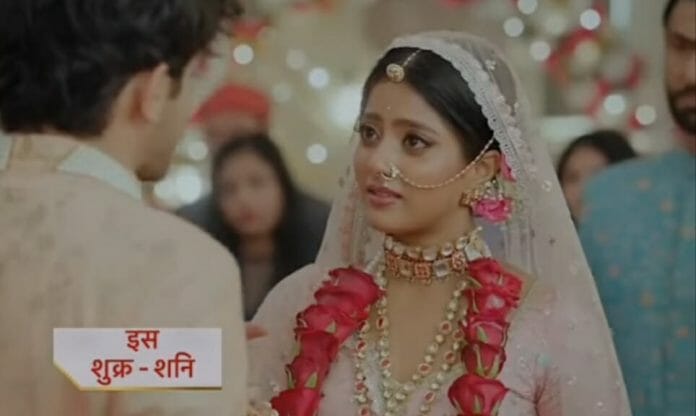 As reported earlier, Kabir asks family members to tell him where are Veer and Viraj. Family members say they don’t know. Kabir thinks to defeat Banni in another way. Kabir goes to Tulika and asks her to come with him. Tulika asks why he is breaking the rule that they can’t see before marriage.

Kabir says everything is fair in love and war so come with me without questioning as we have to get united. The next day, Kabir and Tulika return home. Tulika tries to tell the truth to Banni but Kabir interrupts her.

Banni sees Agastya. She asks why he is here. Devraj says he called him here. He suggests Banni and Agastya marry each other. Kabir comes there and makes fun of everyone. He mocks Banni. Agastya takes a stand for Banni. Kabir asks what right he has. Agastya is about to say something.

Banni says he is going to be my husband and until now it’s fake marriage but not anymore and Banni will get married to Agastya in this mandap. She says if Yuvan loves me then he will come out to stop my marriage so let’s see whose love wins Yuvan or Kabir.

She swears on Yuvan and tells him that she will become Agastya’s if Yuvan didn’t come out. Kabir asks them to marry before his marriage. Banni agrees.

In the upcoming episode, viewers are going to witness Banni will take pheras with Agastya. Yuvan tries to come out but Kabir warns Yuvan to not come out, still Yuvan comes out for Banni. He says Banni. Banni runs to Yuvan and tells him that they did everything to make him come out.

She reveals him that today they are going to get married in mandap. Yuvan agrees. Agastya stops Yuvan from marrying Banni and reveals to everyone that last night Kabir married Tulika. Banni breaks down in tears.

Who is behind Yuvan’s trauma? How Banni will react to Kabir-Tulika’s marriage?
All these questions will be answered in the upcoming episodes.