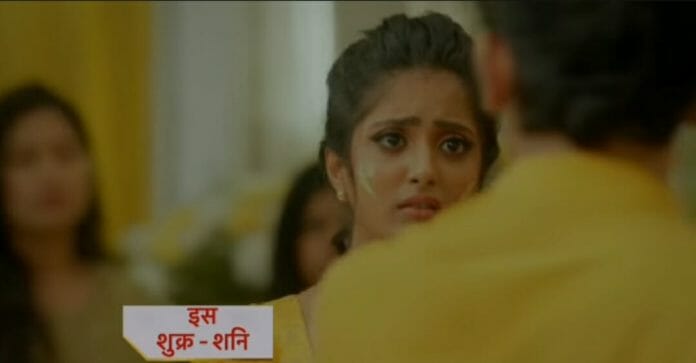 As reported earlier, Tulika feels guilty for hiding the truth from Banni. Kabir goes to Tulika’s room with Haldi. Tulika says he can’t bring it. Kabir says he updated the ritual. She tries to say something. He stops her and makes her wear the jewellery. She feels happy. He says he will apply Haldi to her. Tulika recalls Banni’s hope and leaves from there. Kabir follows her to apply Haldi and he applies Haldi to Banni thinking she is Tulika. Banni feels happy.

Banni asks Kabir to not come to her Haldi as it’s going to be Agastya’s. Kabir says he will come as he is happy that she is leaving his life. Banni challenges him to apply Haldi to her first if he is that much happy.

Rohan tried to inform Kabir about Banni’s fake wedding to make Agastya get Banni but Agastya stops him. Viraj asks Veer to not create any drama. Veer thinks he has to end the drama and he sees his phone. Agastya comes to Rathore mansion. Banni sees Kabir and talks closely with Agastya.

Kabir applies Haldi to Banni and tells Banni and Agastya that he will make their event more memorable, he says Today is haldi, and they will be married soon so I want Agastya to complete the ritual of applying vermilion today. Everyone gets tensed.

In the upcoming episode, viewers are going to witness Kabir will forward Vermilion and asks Agastya to apply to Banni’s mang.

Agastya looks tense. Kabir says tomorrow I will get married to Tulika then Banni will put Chandan mala to her dead husband’s Yuvan photo. He tries to put garland around Yuvan’s photo but Banni stops him.

Can Yuvan win over Kabir for Banni’s love? Will Kabir catch Banni’s plan?
All these questions will be answered in the upcoming episodes.