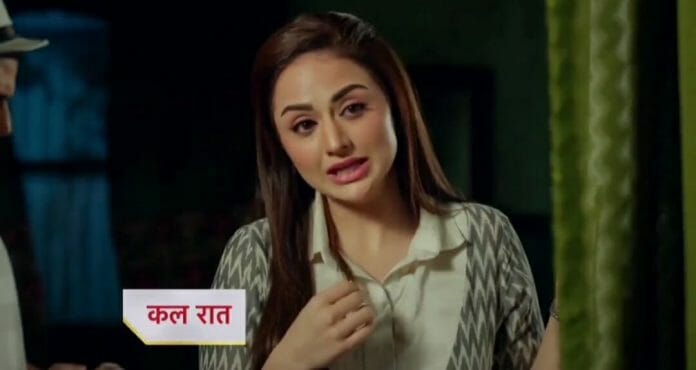 As reported earlier, Manini thinks she may get exposed if she takes Hemant so she asks him to take a rest and tells him that she will bring Yuvan. Hemant denies it and calls his driver. Manini asks Niyati to wake up Viraj and we may need him there. Banni takes care of Yuvan. Accidentally she drops Sindoor’s box.

Banni says tomorrow my aunt will scold me. She collects the sindoor. Yuvan asks why she doesn’t wear it. Banni tells him the importance of Sindoor. Myra says Doctor is here. Doctor checks Yuvan.

Hemant and Manini arrive near Banni’s house. Manini feels shivering to see the poor area. Hemant asks her to not think about it saying it’s her past that she faced. They go inside Banni place.

The doctor says the fever is high. Manini says they will take Yuvan from there and shows him to a reputated doctor. Banni says he is Abhinav Desai. Hemant feels surprised to meet him. Manini asks how is he here. Abhinav says Banni brings food to my father and I’m grateful to her and will come even if she calls me in the night. Doctor asks her for Yuvan’s medicines.

Hemant asks Manini to show him. Abhinav says I feel he had a reaction with some medicine and we need to get him tested to know what happened. He tells he will send his boy in the morning to get him tested. Banni and Hemant thank him. Abhinav asks them to keep Yuvan in the Banni house as traveling is not good.

Manini calls Myra aside and scolds her for lying to her. She says their servant’s bathroom is better than this messed up house. Myra says there is a reason for it and Yuvan saved Banni from goon like a hero. Hemant hears it.

In the upcoming episode, viewers going to witness Raja will mock Banni saying the big car has again come into this area and this time it’s not for your mom but for you. Banni will hold his collar. Manini will hear it and thinks to find out about Banni mother’s reputation.

Will Hemant learns about Manini evil plans? How Manini will escape?
All these questions will be answered in the upcoming episodes.