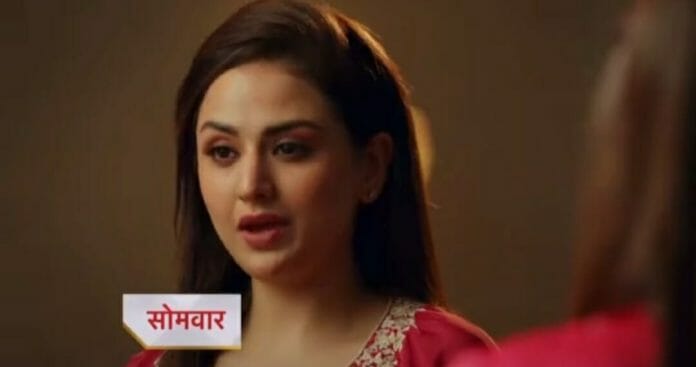 As reported earlier, Manini tells Banni’s mother is a rich man’s mistress and after the rich man had his fun with her he left her. Banni breaks the glass hearing what Manini said about her mother. Hemanth takes Banni’s name and warns her.

Banni tells it is the truth that my mother used to make food in marriage but she never sold her body. The rich man that you said used to stalk my mother later it didn’t work and he started scaring her and one day he abducted her infront of everyone but no one came to save her.

After three days we found her dead body on that day a new Banni took place. This Banni will never allow a rich person to act as he wants. So think whatever they want but my mother’s real story is my inspiration.

Banni says she will come here no matter what she does and says her catch phrase. Devraj praises her and says he will be with her. Everyone also claps for her and Banni goes along with Band Baja.

Viraj and Charmi bring Yuvan to his room. Viraj says it would have been good if he was conscious then he would have seen how his Banni has been humiliated. Viraj says still we can have entertainment. Charmi asks how.

Viraj sprays pepper spray on Yuvan’s eyes. But Yuvan doesn’t even blink. Charmi, Manini, and Niyati cough. Manini asks him to stop and says we are going to get all the money and he also has to look good in the photos after all it is his marriage. Viraj agrees.

Devraj tries to call Banni but it doesn’t go. Banni thinks of what happened in Rathor mansion and her past and she beats a drum in anger. Banni remembers what her mother said that she should fight with the world.

In the upcoming episode, viewers going to witness Sulekha will ask Devraj Banni has taken Yuvan’s blood sample but whether the report will come to us or not. Devraj will say tomorrow is Yuvan’s marriage how can we stop it.

Viraj will tell to Manini that he heard that Banni is going to come tomorrow. Manini will say Banni will not come tomorrow. Banni to shown to have fallen into Vishnu’s hands after being tired by beating the drums.

How Banni will save Yuvan? Can Manini bear the anger of Banni?
All these questions will be answered in the upcoming episodes.