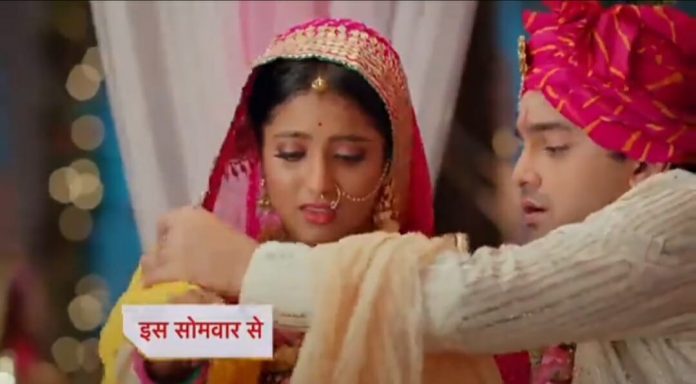 As reported earlier Devraj tries to convince Banni for Yuvan’s marriage but Banni says she will only marry Yuvan after she finds out who sent the photos to everyone. Viraj tells Veer and others that Devraj is doing Yuvan’s marriage with Banni today in the Basti.

Veer calls Manini and says Devraj is marrying Yuvan with Banni. Hemanth and Manini are shocked to hear it. Manini asks to stop this marriage. Banni brainstorms how to find who is the person that sent the photos.

Yuvan comes and Banni tells Yuvan. After talking with Yuvan she gets an idea of how to catch the thief. She calls all the Basti vale and tells about Ayushman who is a hacker and with his help she will find the person who sent these photos.

Mamisa asks Devraj to distract her and says she will handle Ayushman. Devraj distracts Banni and Mamisa goes to Ayushman and gives him money and tells him not to take her name.

Veer and his family come to threaten Banni to stop this marriage. Veer threatens Banni and says they will take the help of the police. Veer and others go away. Mamisa comes and says she came from meeting Ayushman and gives her the address that Ayushman gave her.

Ayushman calls Banni and tells her the truth. Banni takes a knife and says to Mamisa that Banni is not going to die because of backstabbing and gives her the knife to stab her in her neck. Mamisa asks about it. Banni says she found out that she is the one who sent the photos to everyone.

In the upcoming episode, viewers going to witness It will be shown that Banni and Yuvan are getting ready to marry. Yuvan will help Banni to get ready. Later he makes her wear his coat and she makes him wear the moon badge.

Manini will get out of her car and walks the stairs and thinks she cannot let this marriage happen.
Will Manini be able to stop the marriage? Will Mamisa trap Devraj?