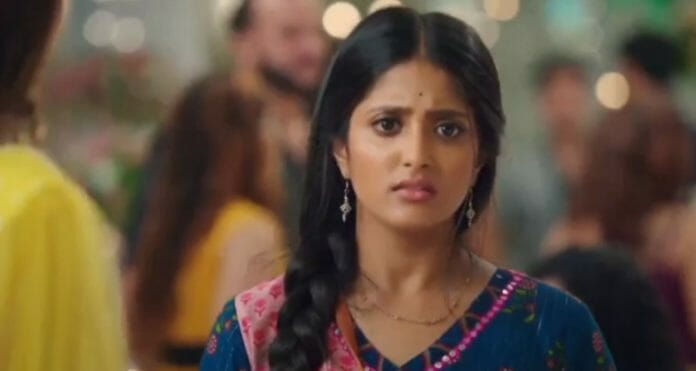 StarPlus TV new show Banni Chow Home Delivery serial is witnessing some major turning points where Devraj puts forth Yuvan’s marriage proposal to Banni.
As reported earlier, Manini sees Niyati in tears. She says these tears are not happy ones right. Niyati says it’s because of Banni and it’s tough to handle Yuvan too.

Manini says I know you can, just manage up to marriage then we can make him bedridden then you can act as Adarsh daughter in law to achieve our target of property. Niyati agrees. Banni welcomes Devraj and Myra. Devraj indirectly asks Banni if she can marry Yuvan.

Banni says why not I like to marry Yuvan but our levels are different. He is a prince and I’m a Basti girl. Devraj thinks she refused without hurting me. The next day Rathod’s family members feel worried about Yuvan sudden dissonance. They didn’t find Yuvan. Myra asks Devraj to call Banni to know about Yuvan as last night I make him talk to Banni.

Manini asks why she did it? Myra says he is stubborn. Brinda says Banni may know as she treats him like his mother. Manini gets angry at her. Hemant says it’s not time to argue. He asks Palak to call Banni. Banni comes there with food.

Palak sees her and tells her she is going to call her. Banni says she thought engagement will be done. Palak tells her that Yuvan is missing.
In the upcoming episode, viewers going to witness the Anchal, and Kalpana will say how engagement will happen without rings. Manini will ask Banni if she took the rings.

Later Yuvan will make Banni wear the engagement ring. Manini will mock Banni and blames Banni for making Yuvan do it. Banni will try to remove the ring but it won’t come out.
Can Banni agree to marry Yuvan? How Manini will react to Yuvan’s stubbornness?
All these questions will be answered in the upcoming episodes.