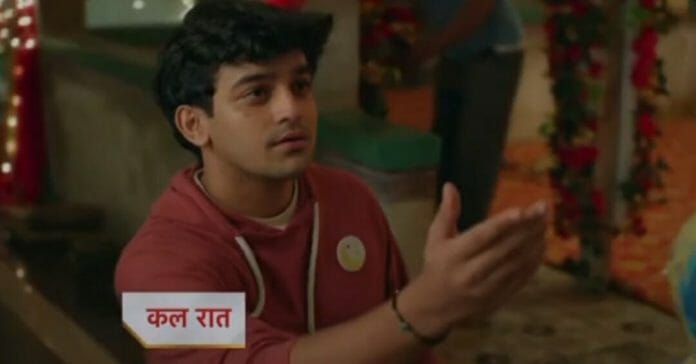 As reported earlier Banni announces she will marry Yuvan and warns the Basti people to not touch Yuvan. Devraj and Maamisa feel happy. Raja says she is lying to save Yuvan and she is just a lover.

Devraj warns him to talk with respect as Banni is going to be daughter in law of Rathod’s and He announces he will perform Banni and Yuvan’s marriage today itself, in front of them.

Viraj says Manini won’t let this marriage happen. He goes to bring her. Vishnu tries to tell Banni that Yuvan is not correct to her. Banni tells him Yuvan is the one for her.

Yuvan recalls that his mom gets angry if he breaks his promise. The videographer places the camera aside which is on. Yuvan tells Devraj that he can’t marry Banni because of his promise.

Devraj smiles and assures him that his mom won’t get angry. Devraj asks decorators to ready the venue quickly. Banni calls Devraj and tells him she can’t do this marriage.

In the upcoming episode, viewers going to witness Yuvan will sit on his feet. He holds Banni hand happily. He proposes her to marry him.

Veer will inform Manini that Devraj is getting Banni married to Yuvan. She will ask him to stop the marriage for 2 hours till then they reach. Veer will threaten to burn the colony if they perform the marriage.

Will Manini be able to stop the marriage? Will Banni agree to Yuvan’s proposal?
All these questions will be answered in the upcoming episodes.