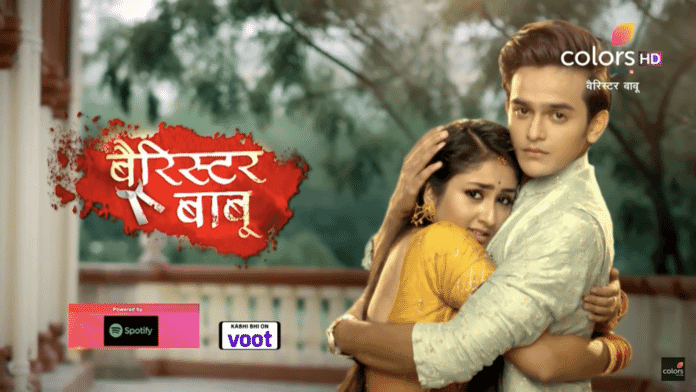 Colors TV show Barrister Babu shows the return of Anirudh’s look alike brother Batuk. Batuk’s hatred for Bondita’s will grow up and to even more when he looses his brother for her. Batuk planned to act like Anirudh till Bondita gives birth to her child. Bondita has started to grow suspicious of Batuk’s strange behavior. Batuk plans to separate Bondita from her sisters because he got separated from his brothers. Batuk’s girlfriend returns to India.

This week began with Bondita finding Batuk checking accounts. She asks Batuk from when he’s started having interest in checking accounts, it’s Batuk who is interested in this. She then shows the letters written by Tapur and says that Tapur didn’t write that letter to Somnath, but someone else tried to copy her writing and says that they have to find that person. Batuk recalls Trilochan’s words and holds the vomit of Bonditta. Trilochan gets happy while Malika feels disgusted. Malika thinks that Batuk is becoming Anirudh by acting like him. Bondita hears the audio recording twice and recognized that it’s Anirudh’s voice and gets shocked. Batuk breaks Bonditta’s award.
Bonditta asks Batuk why he changed, why he’s doing like this. Batuk says that he’s not husband, but Anirudh Roy Choudhary. He says that he wants she walks with him, but not ahead him. He doesn’t want she forget her family and her husband in her successful barrister career. Batuk tells Bonditta she has to decide whether she wants to show her love for family or for the barrister tag.

Bondita says that she can’t accept that Anirudh who can give his life for her self-respect, can bring his pride in between their relationship. Malika takes her and Batuk photo and decides to tell the truth to Bondita. Bondita finds something is fishy and gets determined to know why Anirudh has changed.

Bondita gets to know one registry post has come for Batuk. She wonders how come he will take it from Italy. Batuk panics after knowing it. It is done by Mallika who wants Bondita to know about Batuk’s reality. She provokes her to receive the parcel of Batuk. Bondita bumps into Batuk while the latter tries to collect his parcel. He runs away and Bondita faints due to an accident while chasing him. Later Batuk scolds her for going out without permission. Bondita also takes stand for herself and she also calls Mallika to know if she knew Batuk is in Tulsipur.

Bondita asks Mallika if she knew Batuk is in Tulsipur. Mallika lies to Bondita and says she is searching for Batuk, she doesn’t know he is here or not. Batuk acts like he cares for Bondita and apologises to her for scolding her. Trilochan tells Bondita not to take stress in this condition. Batuk imagines Anirudh in front of him and laughs. Anirudh says Batuk can’t hide his truth from Bondita for a longer period of time. Batuk says that will happen later but before that he wants to hug him as its been so long he didn’t hug him. He is about to hug Anirudh but it disappears.
Batuk gets emotional as Anirudh left him forever. He says no matter what happens he will snatch Anirudh’s child from Bondita and will throw her out of the house to avenge her. Before that she won’t be able to learn his truth. He laughs.

Batuk talks to Trilochan about Anirudh making Bondita a diamond when she was about to die. Anirudh sacrificed a lot for her but in return he got nothing. Trilochan says Bondita also saved him many times, she even fought case to save him. Batuk says that was to prove a point that a woman barrister is also capable of doing everything. She is selfish. Batuk provokes Trilochan against Bondita. Trilochan says Bondita is not like that. Batuk adds he told her not to go out that too being her husband but she disobeyed him. She still left for post office to show off that a woman can do whatever she wants. Batuk says they should give orders to Bondita from now on and she has to follow them.

Bondita asks Bihari to give her car keys as she will go out for some work. Bihari stays silent. Bondita says if Anirudh is not sending car she will go by walking or she herself will drive if theres no driver. She won’t stop. Bihari draws a line in front of her and Trilochan says Bondita is not allowed to cross that line. She will stay inside. Bondita requests Trilochan that she will take care of herself. Trilochan says he doesn’t want to hear anything. She is not allowed to go out until she gives birth to the baby. If she doesn’t listen to him or disrespects him he will leave the house or will cut ties with her. Bondita gets shocked hearing that. She says that’s really unfair but he leaves. Batuk comes and starts laughing. He gives medicines to Bondita and she is about to say something to him but he leaves.

Batuk plays mouth organ. Bondita brings her special telephone to talk to Batuk. She thinks by this strategy Anirudh will tell her what he is feeling maybe. Batuk gets surprised seeing that and leaves. Bondita thinks why Anirudh has changed so much. She gets teary and recalls her past moments with Anirudh. Bondita hides in the box and makes noise to talk to her patibabu. Bondita says they have gone through a lot previously so why this small misunderstanding is affecting their relationship a lot. Batuk finds it weird and he leaves.

Bondita talks to Dugga Ma that now Anirudh wants her to stay home but he also said to her that she won’t sacrifice her dreams then what she should do now. She asks for help from Dugga Ma. She plays sankh and Anirudh is seen laying down in someone’s house. He regains consciousness and takes Bondita’s name. The house owner thanks God for his recovery. Rishta Tera Mera plays.

Bondita decides to fight case for a widow after 6 months. Trilochan does not allow her but she does not listen to him. There Batuk tells Mallika to leave for Italy as Bondita may doubt them anytime. Mallika thinks of killing Bondita’s child. There Anirudh slowly recovers in another place and takes Bondita’s name. Batuk plans to take Anirudh’s child and plans to get Bondita out of the house. Bondita goes against Trilochan’s will.

Bondita recalls Trilochan’s warning before going out. She finds herself in tough spot. She recalls Anirudh’s words who always gave her courage to fulfil her dreams. She leaves. Batuk laughs seeing that and says today Bondita made things easier for him by going to court. She lost Trilochan’s support. When she will be busy fighting cases in court he will plan to snatch her child. Noone will fight for her not even Trilochan.

Anirudh murmurs Bondita continuously and the person assures him saying he will soon get better and will tell about his loved ones. Bondita’s admirers take her home and praises her talent. They say that because of her now widows can remarry and can stay with their children. They congratulate Trilochan and tell him to eat sweet but the latter shouts at them saying he won’t eat. Bondita requests them to leave. She promises Trilochan that after this she won’t fight any case until she gives birth to the child. Trilochan leaves. Bihari tells Bondita to have food but she says she is not feeling hungry. Batuk scolds Bondita and forces her to eat food for child’s sake. He shouts at her and Mallika recalls how she mixed mushroom in dishes. She says now Bondita’s child will die and Batuk will be hers only. Mallika smirks and Batuk goes to bring medicines for Bondita. He slips on his way and enters Mallika’s room by mistake. He finds white mushroom on floor and Italy tickets of him and Mallika. He finds something wrong and doubts Mallika’s intentions. He rushes to stop Bondita from eating the food. Bondita is about to eat the food and Batuk stops her in the meantime. Mallika hides seeing Batuk and Bondita questions him why she can’t eat it. Batuk again reacts impulsively and doesn’t give any reason. Bondita feels weird.

Batuk confronts Mallika and threatens her with a knife. He says how dare she tried to kill Anirudh’s baby. He says she will get out of the house at once else he will kill her. Mallika gets scared. Bondita looks for Anirudh and Batuk is about to throw Mallika out of the house at late night and one vase falls down. Bondita hears noise and goes to check. Batuk hides with Mallika and then he throws her out. He warns her not to come back again. Bondita asks Batuk where does he go every night without telling her. She is his wife, she has the right to question him. Batuk says he doesn’t want to hear her lecture of rights. Bondita finds a hair on his shirt and he thinks it must be of Mallika. He says how can Bondita doubt him. He tells her to sleep. Bondita says she won’t sleep until she gets her answers from him. She says he is not even talking to her properly from few months. He doesn’t share anything. They just have a formal relationship where he shows concern to her. Bondita asks if he likes someone else. She won’t get mad but will leave him forever if it’s right. Batuk thinks he has to start his drama to convince Bondita until he gets the child. He acts like Bondita hurt him a lot by questioning his character. She doesn’t obey his words and she crossed all limits today by calling him characterless. She just cares about her own rights. Bondita says she didn’t mean that. Batuk leaves. Bondita thinks Anirudh is hiding something for sure.

To know what will happen next in your favorite shows stay tuned to this space.