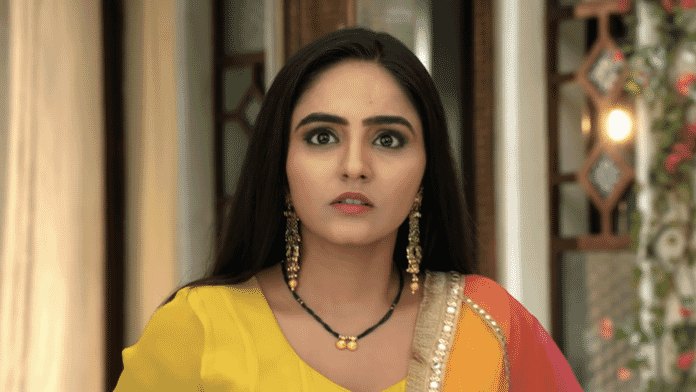 Colors TV show Bawara Dil is entertaining the audience with its intriguing storyline. Currently, Siddhi and Shiva are dealing with their inner conflicts and not realising their true feelings for each other owing to several past mistakes also Shiva’s slave like attitude angers Siddhi as she is a headstrong girl.
Recently Akkabai has come with marriage proposal for Sonal in Shiva’s house. She is in Sarkar’s side and supporting his evil deeds. Will Shiva be able to understand the true colors of Akkabai? It will be interesting to watch how Shiva finally takes a stand against the wrongdoings of Akkabai.

Previously its seen how Kiran saved Sonal from Sarkar and Shiva misunderstood the whole situation seeing Kiran and Sonal together. Shiva tried to slap Kiran and the latter stopped him. Mangal acted like Devi Ma has entered her body and she behaved like a possessed person to fulfil her own selfish motive.
Later Siddhi’s possesed aunt attacked Mangal and Mangal’s drama got exposed. Shiva found it utterly disgusting and he told Mangal to apologise to everyone for playing with their emotions. There, Siddhi consoled Sonal and regretted for not reaching out to Sonal to save her from Sarkar.

Ahead, Akkabai came along with Sarkar with Sonal’s marriage proposal. Everyone got shocked to hear that. Other side Shiva thought of teaching lesson to Kiran without knowing the truth.

In future episodes viewers will see interesting drama. Akkabai will give marriage proposal to Sonal which will shock everyone. Siddhi will tell her to ask about Sonal’s opinion but Akkabai won’t budge.

Later Sarkar will be asked to talk to Sonal privately. Siddhi will pour Ganga jal on Sarkar to taunt him. There Shiva will get to know Kiran’s mother is ill and he will admit her in hospital. Sonal will get scared thinking she can’t marry an evil person like Sarkar, so she will take a shocking decision.

Sonal will plead Kiran so that he marries her and protects her from Sarkar. Shiva will again misunderstand Kiran and will start beating him.

Will Siddhi tell the truth to Shiva?

Will Shiva agree for Kiran and Sonal’s marriage?