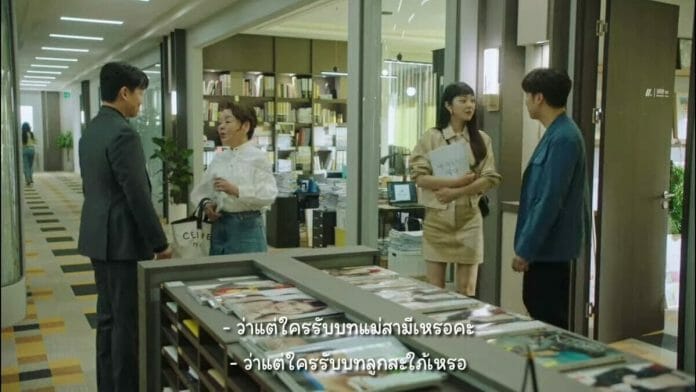 The episode starts with Kim Hee Sun practicing some lines when veteran actress Kim Soo Mi makes her entry. She appreciates Hee Sun’s ambitious nature and Hee Sun gives her the pass for her stage drama. Soo Mi agrees to spare some time for her. Just then Hyo Rim makes her entry and greets Soo Mi. They both seem really close with each other. Soo Mi leaves to meet with Director Ma while Hyo Rim leaves to meet with Mr. Kim. They both were signed with the same script unaware to one another for different roles. They get surprised that they are playing Mother in law and Daughter in law in the serial. It’s actually Director Ma’s plan who wanted them to work together as it’s a big project and it would benefit their company for two of their actors to star in such a big project. Mr. Kim understands his plan but is not sure about it.

Director Ma tries finding a good opportunity for Hyun Jo as he regrets for her behavior towards her. Eun Gyul texts Hyun Joo not understanding the reason for her distant behavior. Eun Soo notices Ma leaving an envelope at Hyun Joo’s table. Hyun Joo reads it to find that it’s an apology letter for his behavior. Mr. Kim is in talks with casting director who wants Hee Sun to audition for their role. Kim is against it as she’s not a part of the company but Hee sun complaints about struggling to land in an opportunity without any back up. She gives her drama tickets to Mr. Kim to check for her talent once and leaves. Mr. Kim gets a message from Hyo Rim that she doesn’t want to be a part of the big show.

Hyun Joo looks happily at the VIP passes given by Director Ma when she notices Eun Soo looking suspicious at her. She tries acting innocent but Eun Soo strongly believes that there is something between Hyun Joo and Director Ma. Hyun Joo at first reveals that he’s her father but later says that he’s her father’s friend. Eun Soo finds it hard to believe but Hyun Joo says that she’s born out of wedlock which is why she can’t reveal her identity to anyone. Eun Soo feels bad for her and asks if he’s someone from their client. Before Hyun Joo could answer she herself predicts that So Ji sub is her father and promises to protect her secret. Next day, Ms. Chun Jae In walks into her office to find a new handsome person and lays her eyes on him. Mr. Kim says that he’s there for tax investigation from National Tax Service. Ms. Chun voluntarily goes to help the tax officer. She then flirts with him. Later in a meeting, Director Ma reveals that Mr. Wang has used some of the company’s money for his own benefit and thought to resolve it once he’s back but it got collapsed. They decide to keep watch on their clients projects while Chun agrees to keep watch on the tax officer. She again flirts with him while making coffee for him.

Hyo Rim and Soo Mi are in left and Soo Mi keeps commenting about her outfits and accessories which irritated Hyo Rim. Hyo Rim leaves to talk with Mr. Kim in private. She says that she doesn’t feel comfortable working with Soo Mi who keeps passing judgements on her stuffs. Jin Hyuk bumps in and suggests her to make them not select her for the role in order to save her reputation. As per his advise, Hyo Rim acted obnoxious in front of Writer Kim. Once she comes out of the meeting, Ma walks in with Soo Mi. Soo Mi pretends like she could see ghosts and scares Ms. Kim. Ma asks the reason for her behavior for which she says that she don’t want to take up the role and trouble Hyo Rim. Ma lies that they offered the role to Hyo rim only because she’s on board. Jin Hyuk tells Mr. Kim about Soo Mi’s behavior and has no possibility to get casted by Ms. Kim. Mr. Kim rushes to her and reveals the real reason behind Hyo Rim’s attitude. Both Ma and Mr. Kim discussed about it where Kim wanted to atleast Hyo Rim to get casted. Ma calls out his submissive behavior and told that no matter what they should get both on board for it could profit their company. Chun gets close to the tax officer only to know that he is the one whom she insulted in social media. She tries making up but he behaves cold with her thinking that she is behaving cozy with her only for the company.

M. Kim have a meeting with Hyo Rim and Soo Mi who reveals that they both acted stupid in last meeting as they don’t want to be casted with each other. She believes that they are the perfect casting for her roles in her show- the selfish mother in law and the daughter in law who despises her. They both rubbished off her claims and says that Hyo Rim felt her identity as an actress always gets overshadowed after marriage as Soo Mi’s daughter in law. She wishes to make her own identity. They clear their misunderstandings while Soo Mi hits Ms. Kim who continues ranting about their relationship comparing it with her fictional characters. Soo Mi revealed that she never really liked the role as she’s done doing the same type of roles. She says that she signed up for this role as Ma told that they would hire her only if she’s on board. Soon everyone finds that they were played by Ma and leaves angrily. Soo Mi and Hyo Rim patch up. Hyun Joo gets ready to go to premier and is on video call with her mother. Her mother advises her to not trouble her father much.

Upon reaching the venue, she bumps with Eun Gyul who offers her a drink and call him whenever she feels fine. He leaves and Ma comes there. He introduces her to Baek Gang Ho of Play Entertainment and leaves them in private. Gang Ho thinks bad about Hyun Joo and Ma’s relationship and extends hand for the same. Hyun Joo creates a scene and angrily lashes out at Ma for putting her in such situation. It’s witnessed by Eun Gyul. Chun and Tax officer leaves together in lift and she watches him leaving.

Mr. Kim suggests to go out for dinner but she turns down his offer. He finds Hee Sun’s play tickets and goes there. At first, he was bored of the paly but later her performance moved him. He also find Soo Mi there and asks about her dream role. Soo Mi wishes to play the role of a endless romantic love story and dreams of the same. Later, Mr. Kim meets with Hee Sun and appreciates her performance. He’s ready to sign her as his new client and she’s overwhelmed. Star Media CEO offers a higher post to Ma in his company in exchange for bringing all the artists from Method Entertainment.