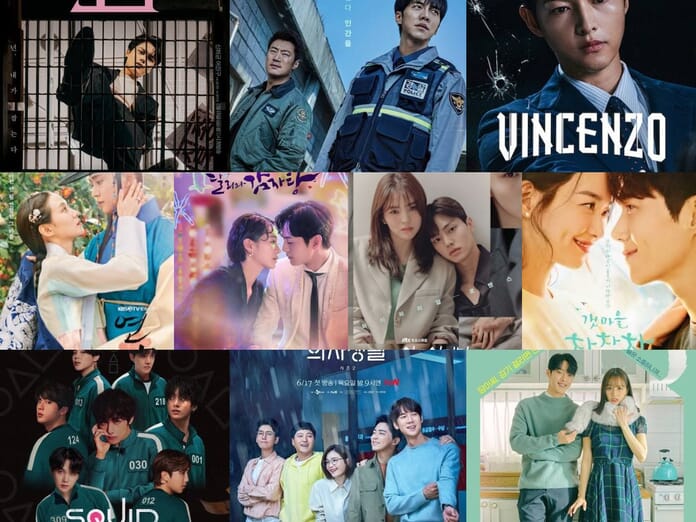 As we bid Adieu to yet another pandemic year, we are grateful for all the amazing K-dramas that got released last year making the covid situation a bit bearable. For all the avid K-drama fans, the year 2021 brought out a mix of all type of K-drama genres from dark comedy, historical romance, Adult Romance, Fantasy to mind bending thrillers. Just like every other year there were few hits and misses as well. In this article we are going to check out some of the best K-dramas of 2021 in no particular order that you should definitely watch if you have not already. The online streaming service Netflix scored big time in 2021 as most of the hit dramas in the list are Netflix Orginals.It may also be available on other streaming services.

This psychological thriller which got released earlier in the year, is about two policemen who chase after the truth in a small town when a cold case involving serial killings resurfaces. If you liked the drama Flower evil which was released in the year 2020, you will definitely love this one for all the twists you will encounter in every episode. No one is beyond suspicion in this drama and it will keep you guessing until the very end. The two male leads has given a splendid performance and the plot will keep you hooked.

My Roomate is a Gumiho

This fun fantasy drama will surely steal your hearts if you are a fan of fantasy dramas with some fluffy romance.Its romantic comedy about a Gumiho ( A nine tailed fox ) who wishes to become human.Due to strange accident  he loses his fox bead to the female protagonist forcing them to start living together. What follows is series of interesting events that is not only engaging but also funny.Jang Ki Yong as the handsome Gumiho will surely make your heart race with his charming manners and charismatic smile.Hyeri of ‘Reply 1988’ fame as the female lead, will leave you in splits with her funny expressions and body language.

For all Song Joong Ki fans, Vincenzo is a must watch as you will get to see a different avatar of Song Joong Ki where he plays a Consigliere to Italian mafia who comes to Korea in search of smuggled gold hidden in a plaza he owns. Its one of those evil fights evil / good Samaritan type of a drama where Vincenzo along with the female lawyer fights and serves justice in his own way.The main success of this Kdrama is that its not just about action & violence, the dark comedy throughout the drama in spite of serious situations will keep you equally entertained.

This is yet another psychological thriller involving serial killings. Although this drama has a lot more gruesome murders ,the plot is so engaging with unbelievable twist and turns that you will not really notice. The entire drama has mind bending plot and if you are a fan of thrillers, then this one will definitely make it in your top favorites.Lee Seung gi has given an extraordinary performance in this drama and its no wonder he got the Daesang Award( Biggest Award recognition in South Korea) for the same.

This was the most awaited drama of the year 2021, ever since the team of Hospital Playlist announced its next season. Hospital Playlist is 2020 hit Medical Kdrama about five doctors who have been friends for over twenty years since medical school. Its like a Korean version of the popular SitCom ‘Friends’ only this is set in hospital and doctors.This is by far the only medical drama that is so hilarious as much as it is serious. Hopital Playlist Season 2, is equally entertaining and focuses bit more on the romantic life of the five friends. If you have not watched already, then this drama is a definite watch and trust us , you will be so addicted that you won’t be able to move on from the drama and its cast. As it’s a continuation of season 1, we suggest to watch its previous season before starting this one. Be warned , this series might get very addictive.

Hometown Cha-cha-cha is a Romantic , feel good and healing drama set in a Small town. Shin Min Ah plays a big shot dental doctor who moves to small town in a whim and opens a clinic. She meets the handsome Kim Seon Ho who is a jack of all trades. Sparks fly between them in the form of bickering initially as they both are polar opposites with different perceptive of life. What follows is a story of understanding, adorable romance and companionship. The drama is set in a  positive note which makes it  perfect in the current lockdown situation if you are looking for something relaxing to watch.

Historical dramas are as famous as romance genre in Kdramas. The King’s Affection is yet another Netflix original that became one of the top most viewed drama in 2021.Its ratings remained peak throughout its run all thanks to its amazing screenplay, unique plot and fantastic leads. Set in Joseon dynasty, a crown princess consort gives birth to twins a boy and a girl but sends the girl away right after birth to spare her life. When years later the twin son dies in an accident, the twin sister must now assume his position as a King disguising her identity and gender.Although there has been many gender bender Kdramas , this one stands out in terms of screenplay and plot.The chemistry between the leads Park Eun-Bin and Rowoon is yet another convincing factor to make this drama a must watch.

Dali and the Cocky Prince

Here is yet another feel good Rom-com drama, that will sure to keep you relaxed and smiling. It also has a bit of mystery in the storyline which makes it all the more interesting. The difference between both the leads characters makes for an amusing story all in all and not to mention their sizzling chemistry. If you are looking for a fun, witty and light hearted drama with cute adorable romance between the protagonists then this drama should definitely be on your list.

Nevertheless is more of a mature Kdrama.Although people have varied opinions on the whole drama its definitely worth a watch and decide for yourself.If you are looking for a drama that is outside the usual Kdrama parameters then you will certainly enjoy the characters.It can be categorized as a teen romance too as the story revolves around college kids.Its an unsual love story between a boy who is weary of relationships but like to flirt and a girl who likes to date but does not believe in love. They start off with a casual relationship that does not involve dating. Be forewarned that there are some really hot scenes between the leads that will surely heat up your screen and make sure not to watch with your parents J !!!

This Netflix original caused quite a stir and is the most watched Kdrama across the entire streaming service! If you like survival game shows and don’t mind the violence then this one is for you.Although it caused controversy due to high amount of violence involved , it does not stop the drama from becoming such a smashing hit! It’s about bunch of people who are in desperate need of cash gets invited to a mysterious game where there is huge amount of cash reward. They are then given some childish games to contest. So what’s the catch? Well if you lose, it result in instant death and with each death the cash reward goes up. The entire drama is very gripping as it proceeds and it causes the audience hearts to race to see how the contestants survive each rounds and the drastic deaths of those who fail.

Well these are just some of the dramas that we thought stood out among the rest, in terms of best plot and story line. Am sure you will have your own set of favorites. Do let us know your favorites in comments.