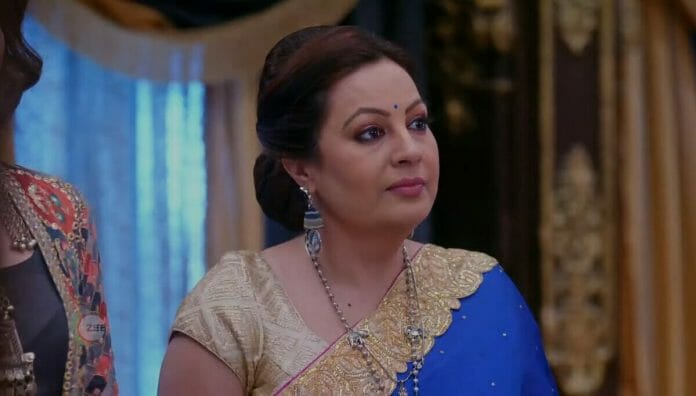 Zee TV popular show Bhagya Lakshmi is attracting viewers with an interesting storyline where Virendra advises Neelam has glued the audience to the screens.
As reported earlier, Virendra says to Neelam that Lakshmi has proved that she is the right wife to Rishi and asks Neelam to also admit it.

Neelam says to Virendra that they will come a day when they will know that Lakshmi is wrong and says on that day she will not forgive them. Lakshmi goes to get food ready for Rishi. But she sees Neelam standing and a servant with food.

Neelam comes into the room and asks Rishi how is he? Rishi says he is fine. Rishi also says Lakshmi will never allow anything to happen to him. Neelam asks Rishi to eat some food and leaves from there.

In the upcoming episode, viewers are going to witness Rishi will massage Lakshmi’s head to make her feel relaxed. Lakshmi prays to God to keep Rishi happy always and he shall get her age. Lakshmi says she is lucky to get him as her husband. He says you are Bhagyalakshmi.

Karishma says to Lakshmi this is your last fast as Rishi’s wife. Lakshmi tells Kiran in front of Dadi, Rishi, and Karishma that if Malishka tries to snatch Rishi from me then it won’t be good for her. Sonia on call informs Malishka about Lakshmi’s words.

Malishka gets angry. Later Lakshmi gets a call and learns about the accident.
What’s Malishka’s plan to get Rishi? Who met with an accident?