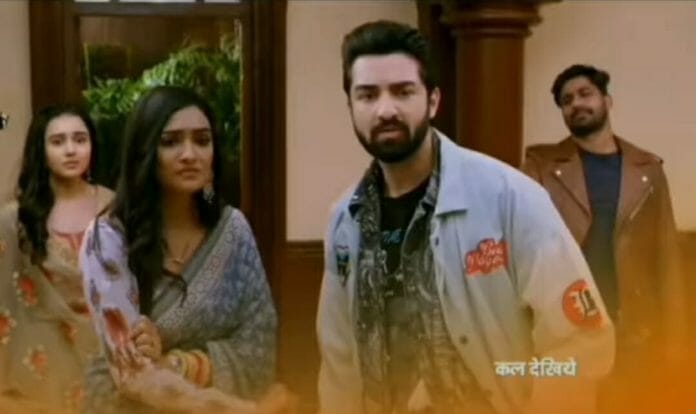 Zee TV popular show Bhagya Lakshmi is attracting viewers with an interesting storyline where Monish shoots Neelam has glued the audience to the screens.
As reported earlier The reporters report that Laksmi has escaped from the terrorists but they don’t know where she is.

A terrorist says to Monish that the cops and reporters are here. Monish thinks it is time to reveal their demands. Rishi punches Monish for shooting Neelam. He threatens to kill Monish. Monish punches him back and says it is not that easy to kill.

Lakshmi runs into Balwinder. Balwinder takes away Lakshmi from there. Shalu goes to find Lakshmi as she understands after talking to the stranger who saw Lakshmi is taken by someone who is not a terrorist.

Rishi wakes Neelam up by sprinkling some water in her. It is later shown Monish shoots Neelam just to scare her and Neelam falls unconscious as she panics.

Balwinder blackmails Lakshmi saying if she marries him then she will not go to jail as he has proof that Lakshmi is innocent. Lakshmi says to Balwinder that she will not listen to what he has to say as she knows Rishi will save her with or without proof.

In the upcoming episode, viewers going to witness Monish will say he will kill Rishi and aims a gun at him. Lakshmi will come there and pushes Rishi and get shot on her hand.

Monish will tell Rishi, you were right and I was wrong, I thought she doesn’t love you and that’s why didn’t come here, but she can give her life for you, you are very lucky that you got such a wife, don’t look at any outsider woman.

Malishka will look on. Rishi will ask Lakshmi how he would live if anything happens to her. Lakshmi will say the same thing. Malishka and Neelam will look on.

How Police are going to save hostages? Can Neelam understand her mistake?
All these questions will be answered in the upcoming episodes.