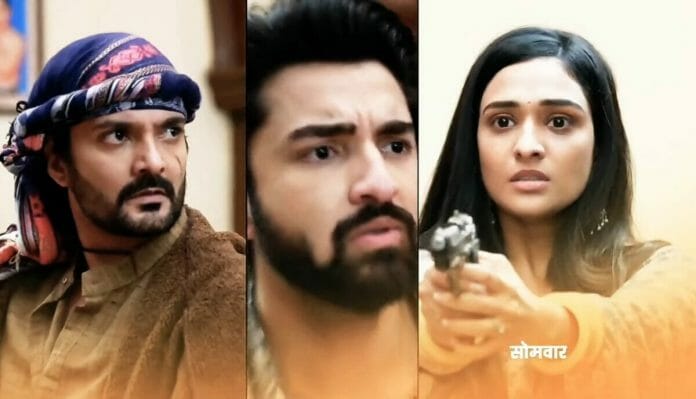 Zee TV popular show Bhagya Lakshmi is attracting viewers with an interesting storyline where Rishi saves Lakshmi has glued the audience to the screens.
As reported earlier Rishi notices that Lakshmi is not behind him. Rishi hears the announcement that Lakshmi is captured and they ask him to come.

Rishi is in conflict with whether it is a trap or not. Malihska sees Abhay is not here and is worried about them. Malishka runs into Rishi. They talk to each other. Rishi tries to go to the terrorists to save Lakshmi.

Malihska stops him by hitting him with a wooden hammer from behind. Rishi falls unconscious. Malishka takes Rishi from there.

Malishka talks to herself to end the countdown and kill Lakshmi. Rishi wakes up. Rishi asks Malishka who hit him. Malishka says she doesn’t know. Rishi goes to save Lakshmi hearing the countdown. Monish sees that Rishi didn’t come and taunts Lakshmi seeing this.

Malishka runs into Balwinder. When Balwinder touches Malishka’s hand. Malishka slaps Balwinder and tells him to act according to his status. Balwinder argues with Malishka and says Rishi is going to die today. When Monish is about to shoot Lakshmi.

Rishi comes in between Lakshmi and the gun. Rishi requests Monish not to do anything to Lakshmi. Monish says he will not kill that easily as he created a lot of trouble for him.

In the upcoming episode, viewers going to witness Monish will order his team to hang Rishi in court premises. Then his team will hang Rishi with a rope around his neck and an ice slab under his feet. Malishka will blame Lakshmi for Rishi’s condition.

Lakshmi will look tense. Dadi will pray for everyone’s safety. That time terrorists wrap Rishi’s photo and throw it outside to police to know the condition of Oberoi’s. Dadi will notice the photo in shock.

Monish will tell Lakshmi that he will kill Rishi if his demands don’t get fulfilled. Dadi will ask the Media to prove their strength. Lakshmi will aim the gun at Monish.

Can Lakshmi save Rishi from Monish? Will the media be able to help Oberoi family?
All these questions will be answered in the upcoming episodes.