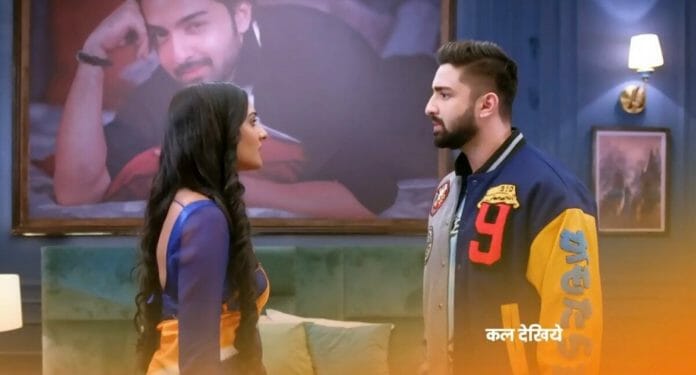 Zee TV popular show Bhagya Lakshmi is attracting viewers with an interesting storyline, Ahana agrees to marry Gautham has glued the audience to the screens.
As reported earlier Malishka tries to set Rishi’s collar but Lakshmi comes in between and sets the collar. Malishka says she thought Lakshmi is in the kitchen. Lakshmi says then you will have a chance to cross your limit and says wherever she is she knows how to fulfill her duty. Karishma points out she has also taken another responsibility. Lakshmi says she has seen all the videos to prepare food. Sudha comes with the Gujral family. She introduces Mr. and Mrs. Gujral and their son Gautham. Lakshmi brings Ahana.

All family members give space to Gautam and Ahana. Lakshmi notices her ordered bags are missing. Malishka recalls how she hid those bags. Lakshmi questions her if she hid the bags. Malishka tells Lakshmi that she won’t do anything which causes damage to the family’s reputation and leaves asking her to fulfill her responsibility. Gautham informs Ahana about his previous marriage.

Ahana fails to tell her affair matter to Gautam and tells him that she likes his honesty. Malishka tells Karishma that they need to take Neelam aunty to the kitchen. Ahana and Gautham inform family members that they like each other. Neelam asks Karishma to feed sweets to everyone as the alliance got fixed. Karishma nods and distributes sweets. Neelam congratulates Karishma hugging her. Karishma tells Lakshmi is again planning for our humiliation.

In the upcoming episode, viewers going to witness Ayush will ask Ahana where is the food as all her stuff is missing. Malishka will tell them Shankar is making food and will bring. Sudha will see the none continental food then she says I told you that they don’t have this food. Lakshmi will pick the food from the sink and says she will not get the food wasted in her house.

Malishka will say your house. Lakshmi will say yes, my house and my husband. Lakshmi will confront Rishi, about why did he show dreams to her, when he wanted to spend life with Malishka. Virendra will blame Lakshmi for hiding the bags to get them to face humiliation.

Can Lakshmi teach a lesson to Malishka? Will the Gujral family like food prepared by Lakshmi?
All these questions will be answered in the upcoming episodes.