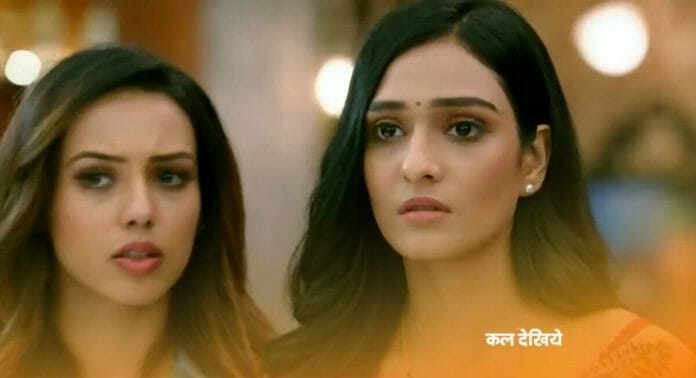 Zee TV popular show Bhagya Lakshmi is attracting viewers with an interesting storyline, Balwinder exposes Malishka has glued the audience to the screens.

As reported earlier Ayush wakes up and sees that it is 12 am. He goes downstairs. Malishka opens the door for the Goons when she hears someone is coming. Malishka and the Goons hide from Ayush. Ayush sees from the stairs that everyone is asleep.

Ayush slaps Balwinder to wake him up. But Balwindar doesn’t then he goes away. Malishka and the Goons loose the rope of Balwindar. Kiran goes down. Rishi asks Malishka why is Balwindar not tied.

Kiran goes to the Goons and says the plan failed go away and act as I tried to stop you and you push me away. The Goons push Kiran away. Kiran calls for Rishi. Rishi tries to after the Goons. Rishi sees that Balwindar is waking up.

Rishi comes to Balwindar and says your friends came to save you but Malishka stopped them. Balwindar thinks I am getting beaten up for her and she is double crossing me. I will reveal the truth then she will know the consequences.

All the family comes. Kiran praises Malishka that she stopped the Goons from taking Balwindar. All the family members praise her. Rishi asks who is the one that told you Lakshmi is pregnant.

Balwinder exposes Malishka by playing the audio recording. Malishka says it’s not her voice and requests everyone to believe her but Noone believe her.

In the upcoming episode, viewers going to witness Neelam and Rishi will ask Malishka to leave their house and Oberoi’s will accept Lakshmi as their bahu. Malishka will feel shocked.
Can Malishka escape? Is it reality or a dream of Malishka?
All these questions will be answered in the upcoming episodes.